These are very exciting, a great way to taste all 4 and talk to an expert at the same time! 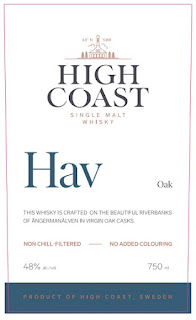 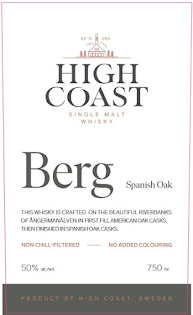 Single malts are made all around the world with Sweden becoming an up and comer in the whiskey world. Luke Tullos, National Sales Director at importer LHK Spirits Group will be waxing poetic about the High Coast distillery and whiskey in general. This event will be illuminating and damn tasty as well. Below is the menu for the evening…

More info about them
High Coast Sixty Three Single Malt Whisky...$109.99
Situated at 63° N, High Coast Distillery is one of the world’s most northern whisky distilleries. Exactly where the 63rd parallel cuts through warehouse No.3 we have matured this unique, heavily peated whisky for 63 months.
63 consists of 100 % peated whisky (63 ppm) matured in 63 liter bourbon casks, for 63 months, 63 decimeters above the ground.
63 is bottled at 63 % ABV. In 63 our distillery manager Roger Melander really set the light on the number 63 and has created a fantastic whisky, smooth and with a long peaty character.

High Coast Hav Oak Spice Single Malt Whisky...$53.99
Hav is the Swedish word for Sea.
In the majestic landscape of a world heritage site, High Coast Distillery sits where the beautiful river Ångermanälven merges into the sea. Here, the river is just about to reach the coast and slowly disappear out into the world, just like our single malt whisky.
The message Hav brings to the world is an expression of oak, with a touch of spice and a little northern hardiness.

High Coast Timmer Peat Smoke Single Malt Whisky...$61.99
Peated single malt whisky matured in first fill Bourbon barrels.
Timmer is our peated whisky, our humble tribute to the men and women who once lived and worked here. Those who risked their lives fighting icy cold waters as they steered the heavy logs downstream and kept warm by burning fires under the pale moonlight.
Posted by Paul Hayden at 4:36 PM