Quick note on new releases in beer and cider...
I will post more info when I have time

"Barley Wine Style Ale is a big beer made with six different malts (Pale Ale, Crystal, Caramunich, Wheat, Chocolate and Roasted Barley) and balanced with a very full hop charge of Summit, Challenger and Fuggles hops. It is a deep reddish brown color with a complex fruity nose, a very full body, and an interesting balance between grains and hops which ends with a pleasing dry taste. To fully enjoy all the flavors, this ale is best drunk at 55 degrees Fahrenheit. 8.5% alcohol by volume." -- brewery
Shipyard Pugsleys Signature Series Imperial Porter 22oz...$9.39
"Imperial Porter is a full bodied, very dark, malty beer with a good roasted character coming from the Crystal, Chocolate and Black Patent Malts used in the mash. Warrior, English Fuggles, and East Kent Goldings Hops balance the malts with a good hop bite. The beer has an OG of 1.070, rounding out after fermentation with just a slight residual sweetness and cutting dry at the finish. 7.1% alcohol by volume." -- brewery

Polycystic Kidney Disease Foundation
Proceeds from the event will go towards research to find a cure.
For more info or reservations
call Brianne Ventus...314-420-7767
brianne.ventus@yahoo.com
Silent Auction
Appetizers
over 40 wines to taste!
Here are a few of the wines you will taste for only $30 donated to the charity.

Posted by Paul Hayden at 1:58 PM No comments:


2007 Struisse Pannepot...$6.49 / 11.2oz
"Commercial Description:In the early 1900s, the village of De Panne, close to the French border, was famous for two things -- the ‘Pannepots,’ or fishing boats, that could be seen along the coast, and the unique dark ale enjoyed by the local fishermen. Our Old Fisherman’s Ale is a tribute to these hardy sailors and their rich, flavorful brew. Unfiltered. Unpasteurized. Bottle-conditioned in 33cl and 75cl" -- ratebeer.com
Rated 100 percentile on ratebeer.com
That is the top, there is nothing better

in stock now- it is delicious! More info. 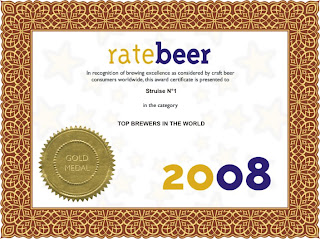 TOP BREWER IN THE WORLD
"All brewers listed are gold medal winners. (The total number of brewers in our contest is 5,836. The 100 listed represent the top 1.7% of all brewers -- the creme de la creme of world brewing; a greater percentage of the population qualifies as genius for comparison.)
With the Ratebeer winter awards of last year, we were already very happy to enter their Top 100. Since that day, Struise team has been working even harder on issues like quality, creativity, and most off all originality.
Today we are very honoured receiving this award, and it will have a special place at our office and in our hearts. It will give us the necessary courage every day in the future to try and do better."

Cheers,
Struise Team
Posted by Paul Hayden at 11:40 AM No comments:

Just a small amount left...
2004 Isole e Olena Cepparello....$55.99
"The estate’s 2004 Cepparello (100% Sangiovese aged in French oak, 1/3 new) was made from minuscule yields of just 600 grams per plant and is even better than the 2003. It exhibits a livelier color, fresher aromatics and a nuanced personality, all the products of a more balanced growing season. It boasts layers of vibrant fruit intermingled with subtle mineral and licorice notes, showing outstanding length on the palate and fine, noble tannins. A wine of extraordinary elegance, it has been stunning on the two occasions I have tasted it so far. That said, readers who want to experience this wine’s full array of tertiary notes will have to give this wine time to mature in the bottle. It is highly recommended. Anticipated maturity 2009-2022."
95/100 The Wine Advocate
Posted by Paul Hayden at 9:30 AM No comments:

Nils Oscar Brewery (The Nils Oscar Company) is a Swedish microbrewery and spirits company based in Nykoping.
The brewery was founded in Stockholm 1996 as Kungsholmens Kvartersbryggeri i Kungsholmen, Stockholm but changed name to Tärnö Bryggeri rather quickly. During 2006 major relocations were conducted and the company got it's current name.
Nils Oscar Brewery is considered one of the top breweries in Sweden and constantly receives good reviews from national beer critics. Nils Oscar beers have been awarded several gold medals at Stockholm Beer Festival during the last years." -- wikipedia.com

Nils Oscar Imperial Stout...$5.69 / 11oz
"This hearty dark ale is roughly modeled on the big satisfying stouts once brewed in England for travel to Russia and the court of the Czar" -- brewery
Rated 96/100 Ratebeer.com
Nils Oscar IPA...$4.49 / 11oz
"The Nils Oscar brewery, like its namesake, has learned a few things from the New World. I.P.A. was virtually reinvented in America; this one uses American Amarillo hops to give the exotic aroma of tropical fruits." -- brewery
Nils Oscar Kalasol...$4.49 / 11oz
"A rich, satisfying festbeer of Swedish barley and rye, modeled on the classic brew once served at the Oktoberfest in Munich,but with extra hoppiness derived from Czech, English and American varieties." -- brewery

Nils Oscar Barley Wine...$6.39 / 11oz
"This classic, hearty ale started out a gold medal winner in the Swedish Home Brewing Championships in 1993, and wen on to win gold in the World Beer Cup in 2000. A little something to see yo through the longest, darkest night." -- brewery

Posted by Paul Hayden at 9:00 AM No comments: