Boegedal Bryghus -- Craft brewer from Denmark
There is a maximum of 700 bottles made in each batch.
Free Falling Brewery
"Bøgedal is an atypical brewery in that it is Scandinavian’s only Free Fall Brewery. The beer runs from cask to cask by help of pulleys and level differentiation… without the use of pumps, and the herb is cooked over an open fire. Because of the delicate methods in use, Bøgedal can produce a nearly clear beer without filtration, thereby retaining many of the important flavours and aromas." -- importer


Boegedal Bryghus No .130...$26.99 / 750ml
"Golden ale with Centennial, Perle & Tettnang 5,8%. Dark golden beer with creamy head. Aromatic Smell like a double IPA. Aroma and smell of extreme hoop compared to a normal Bøgedal beer -properly because of the used of Centennial hoop as bitter hoop. A sense of sweet licorice . An exceptional good beer for enjoinment after dinner." -- importer 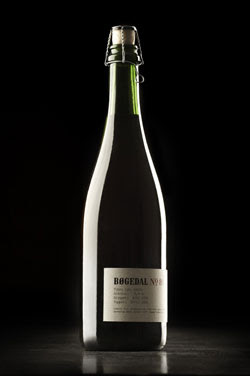 batch will be somewhat different in flavor & aroma profile due to the very unique brewing process of Boegedal.)
"Dark Ale with Northern Brewer, Orange, Brown Sugar 6.3% Dark-brown beer with a dark-brown head. Smells sweet of prunes and citrus with an acidic tip. It fills the palate with its sweetness, and opens up into a pleasant bitterness. Hangs in the mouth like a dark chocolate with a faint smoky aftertaste. Goes well with venison and chestnuts, blackberries and brussell sprouts, smoked or salted meats." -- importer
"JyllandsPosten -- Bøgedal No. 103, 6.3% -- Of course, there come charming brewers out of the Vejle River Valley. Brewer Casper Vorting has found a magical formula for beer, that justifies that it is also Denmark’s most costly. He doesn’t try to interpret an IPA, a monastery brew, a Bock, or for that matter any other of the many beer types. Beer from Bøgedal is Bøgedal Beer in their own, styled fashion. No. 103 – the number signifies the succession in order of brews – is like most Bøgedals round, soft, vitally emotional and discreetly seductive. With a hint of Porter, a bit of chocolate and zesty orange, coupled with a 6.3% kick, it has a bit more of a love-bite than the brewers other passionate undertakings. 6 out of 6 stars” -- importer 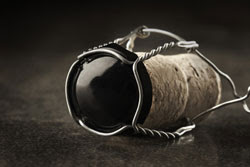 bubbles and creamy head. Aromatic sweetness with traces of honey, wheat and fine wine. A wonderful latent sweetness and bitterness with a taste of citrus. Good body, balanced and comfortable. Goes well with an informal get-together, but also with classical white meats and poultry, yams, pasta, mushrooms or mature, but mild, port cheeses.

Jan Filipe, Barley Wine, describes a Bøgedal Beer like this: “…is the only one in Denmark, maybe in all of Scandinavia, that is remarkably singular, finding no points of reference among its fellows. Were we to find a parallel in the world of wines, it could be nothing less than a “Pingus-beer”. The world famous Danish Newspaper, Jyllands Posten, short and sweet, describes Bøgedal Beer as, “…a world-class brew with depth and originality”, and ranks the brewery among the top 5 best breweries in the country in 2007." -- importer

Posted by Paul Hayden at 8:22 PM No comments:

Toren makes some amazing beers.
Here are a few that we have in stock now!

/ 750ml
Almost gone for the year, it is available November to February
"Canaster, a subtle Winter Scotch, is the third beer from the brewery. This beer is only available from November till February. Yet it was a definite choice to avoid any clear reference to Christmas or New Year in the name. On the other hand the name Canaster clearly refers to an ancient brewing tradition of Aalst. Centuries ago Canaster was brewed in the Carmelite convent in Aalst. The archeological site was recently uncovered and is the subject of an historical investigation. Canaster now relives as a Winter Scotch, a beer for the long, cold winter evenings. Here the same natural ingredients are used as in the two other products of the brewery, including the Hallertau hop from the Aalst area.This beer with a 9.5 % alc. vol. owes its warm aroma and its full-bodied taste to the use of fine, dark malts (caramel). The same 25.4 oz. bottles are used but the wrapper is white, red and green. The brewery offers a special winter glass for this beer. The logo of the brewery has here been transformed into a winter scene." -- importer

Toren Jan de Lichte Imperial White Ale...$11.99 / 750ml
"Jan De Lichte is the fourth and the latest beer of brewery De Glazen Toren. Again the name refers to local history. In the 18th century Jan De Lichte was the leader of an infamous gang of robbers in the region of Aalst – Zottegem. He was executed in Aalst at the age of 25.The beer was developed only very recently (May 2005). As it is brand new it has not got a wrapper yet. It was first introduced to the public during a two-day beer Festival in West-Flanders in early June 2005.Jan De Lichte is a wit beer. But following ancient tradition we are using four grains beer: Barley and wheat are used of course, but there is also oats and buckwheat.Jan De Lichte is the only Glazen Toren beer to which spices are added, following the Belgian tradition of wheat beer brewing. The use of coriander and curaçoa makes for the extremely fresh, citrus-like taste. The rather high alcohol percentage (7.5 %) indicates that it is more than just a thirst quencher. Quite like Jan De Lichte himself some 250 years ago, the beer is not innocuous." -- importer
Beer Advocate -- "A-" excellent w/ 35 Reviews
Cuvee Angelique Historic Recipe...$11.99 / 750 ml
"The “Speciale Belge” beer style was created in 1904 for a brewing contest that was organized by the Universities of Belgium. The goal was to improve the quality of Belgian beer. The winner was a new style, called “Belge”. Due to the success in the contest, a number of brewers decided to brew the style and called it “Speciale Belge”.
A “Speciale Belge” is pale amber in color (slighly darker than a pilsner) as brewers tried to copy the color of pilsner in a top fermenting ale. Later the color became darker as pilsners became very common to prove that the style is something special." - importer
Beer Advocate -- "A" --outstanding w/ 17 Reviews

.....$11.99 / 750ml
"The Saison was the first beer of the brewery.Saison is a blonde beer brewed according to the ancient Saison tradition of the province of Hainaut. The French sounding name of the beer clearly refers to this.Saison d’ Erpe-Mere is brewed exclusively with natural ingredients: artesian water, barley and wheat malts, liquid sugar, hops and yeast.The result is a dry, hoppy, fruity and slightly veiled beer with 7.5 % alc. vol." -- importer
Beer Advocate "A" -- excellent w/ 75 Reviews
www.beeradvocate.com
check out more info
.
Toren Ondineke Tripel....$11.99 / 750ml
"Ondineke, subtitle Oilsjtersen Tripel (Tripel from Aalst) was the second beer of De Glazen Toren introduced under its own label.Ondineke derives its name from the main character of the most famous novel of the most renowned author of Aalst ( De Kapellekensbaan by Louis Paul Boon, translated into English in the early seventies as “Chapel Road”). A statue of Ondineke can be found at the entrance of the City Hall of Aalst. Ondineke is a classic tripel, brewed in the ancient way, again with exclusive natural ingredients: artesian water, malt (barley), hops, yeast and liquid candy sugar. As in the Saison no spices are added. Ondineke is an unfiltered top fermenting beer. It is soft, creamy, and of golden color. It is double hopped with the last real hops available from the region of Aalst (The variety is Hallertau Mittelfrüh). Just like the Saison, Ondineke is bottled in 25.4 oz. bottles. The self-designed wrapper is white, yellow and red (the city colours of Aalst).Ondineke has a positive taste evolution and the bottles are best kept standing in a cool, dark place. It is best before two years after the bottling date. 8.5 % alc.vol. makes this a beer to be savoured. Preferably Ondineke is to be served at a temperature between 6 to 10° C. Moreover Ondineke is at its best when served in the originally designed Glazen Toren glass.
Posted by Paul Hayden at 8:00 PM No comments: 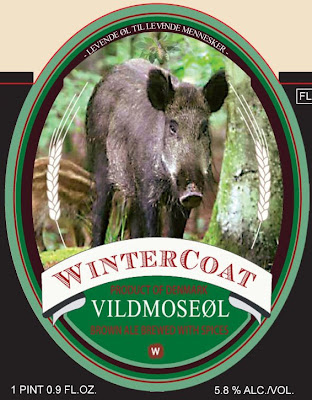 Peat Smoked Ale
"Don't try to pronounce the name of this beer without at least one under your belt! This beer was brewed for the Lille Vildmose nature center in northern Jutland. The area is characterised by peat bogs, which inspired this brown ale with its subtle notes of peat-smoked malt, the fresh, spiciness of bog myrtle and the bittersweet fruitiness of rowan berries. These 3 ingredients harmonise beautifully with the other malts and hops used. A wonderful beer to drink with game, lamb and braised meats - and it does justice to pickled herring as well!" - importer

"The WinterCoat brewery is a family-owned and operated brewery situated on an old farm just outside of the village of Sabro in Denmark. Niels J. Thomsen, owner and brewer, was born in the farmhouse. The brewery has a capacity of 8 hectolitres, and we can brew this 4 times a week." -- importer


A new one from Wintercoat... 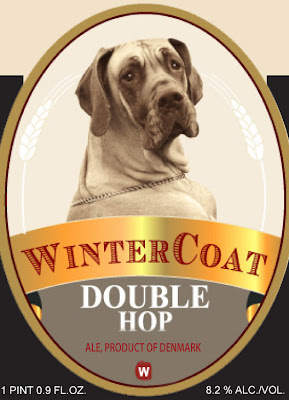 Wintercoat Double Hop....$17.99 / 750ml
"WinterCoat's Imperial IPA is light amber in color. The fruitiness from the ale yeast combines beautifully with the body of the malts and the freshness of the hops to create a very well-balanced, though very heavily hopped brew. Double Hop has a heady hop aroma without too much bitterness. The smooth taste belies its 8.2% alcohol content. This beer is dangerously pleasant to drink!" -- importer
Rated A- on www.beeradvocate.com
Posted by Paul Hayden at 5:11 PM No comments: