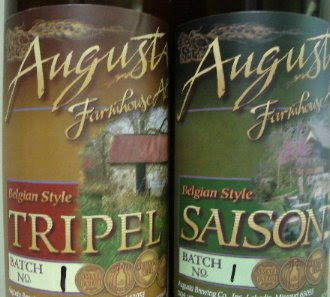 Another Missouri Brewer is now bottling...
Augusta in Labadie, Missouri has produced two bottle-conditioned Farmhouse ales.
.
.
.
Augusta Farmhouse Ale Saison Batch#1...$8.99 / 750ml
"When farmers in the 19th century Europe had no safe drinking water, the folks in Wallonia, Belgium had a simple solution. They created Saison as a crisp and refreshing reward for workers at the end of a long day. Today, when it comes time for refreshment after a hard day's work or play, we recommend Augusta Saison." -- brewery
6.5% ABV
Augusta Farmhouse Ale Tripel Batch#1...$8.99 / 750ml
"The Adrennes Forest. A peacefull escape. A place for reflection. A romantic retreat. The site of some of the world's oldest monasteries. Also, home to the speical yeast that gives Augusta Tripel its signature taste and fruity intensity. We us palm sugar from India to create a 9% ABV beer. Our deep golden Tripel Abbey Ale always transcends the ordinary." -- brewery
9% ABV
Posted by Paul Hayden at 8:48 AM No comments: 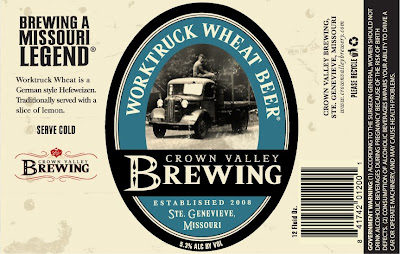 Crown Valley Brewing
St. Genevieve, Missouri
Looks like they might be getting closer. I have contacted the brewery, but have not heard back yet.

From their website...
OUR BREWMASTER
"Crown Valley Brewmaster, Mark Walters, began his career as a free apprentice at Independence Brewery in Ft. Lauderdale, Florida. Learning under his talented mentor, Scott Christofel, Mark worked 40 unpaid hours a week for over a year. Using Christofel as a reference, Mark then landed a position as Head Brewer for Big Bear Brewing Company in Coral Springs, Florida. 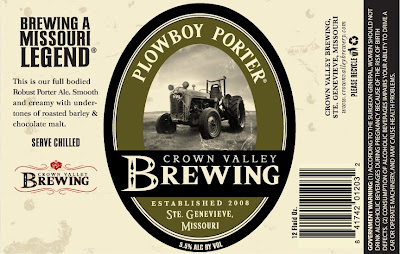 Putting his education and talent to good use, the brewery produced 500 barrels per year with 16 different styles on 7 taps. After leaving Big Bear, Mark worked for a short time at Bullfrog Brewery in Williamsport, Pennsylvania. In just one year, Mark worked to produce over 25 different styles. In 2002, Mark began working as an Assistant Head Brewer at the major microbrewery, Abita Brewing Company in Abita Springs, Louisiana. Producing an impressive 60,000 barrels per year, Mark worked with renowned styles like Purple Haze, Turbodog and Restoration Ale. Mark, along with his family, has now made his home in Ste. Genevieve, Missouri to become Crown Valley Brewing & Distilling Company’s Brewmaster. Mark will be producing a line of handcrafted brews to be enjoyed by thousands. With his favorite styles and techniques, 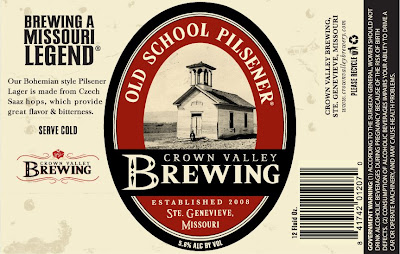 Mark brings his expertise and artistry to Crown Valley. Mark believes that brewing is part science, but entirely an art form. His favorite beer is Belgian Dubbel and he prefers French and Belgian Ales. Taking pride in his craft, Mark says, “When everything comes together and you make something to be proud of, it is something special.” And just as he is proud of his creations, Crown Valley is proud to welcome him as Brewmaster to Crown Valley Brewing and Distilling Company. -- Crown Valley

Posted by Paul Hayden at 8:36 PM No comments:

Schlafly Quadrupel is due soon. 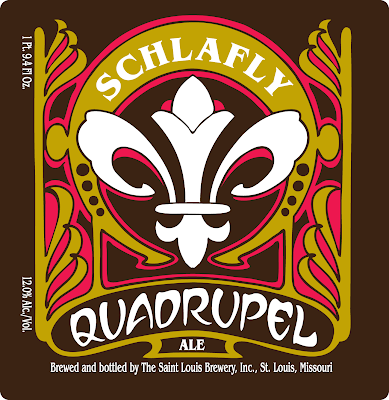 No official word yet, but hopefully in a few weeks.
"Schlafly Quadrupel is, as its name implies, a serious beer. But don't be intimidated. This fourth beer in our bottle-conditioned Belgian beer series has a rich, malty backbone that generously balanced by select, fresh hops to create a luscious, smooth character. Sharing it with friends enhances the enjoyment, whether in front of roaring fire or at the finest dinner party. This beer pairs perfectly with all types of food, particularly those with assertive flavors. " -- from the back label
12% ABV

In stock now...
Start your beer cellar with a vertical of Schlafly! 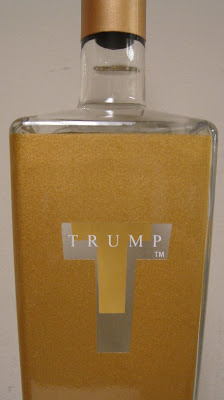 The Bargain of the Year?
At this price you cannot pass it up -- cheaper than Absolut, Skyy, Smirnoff, Ketel One, Grey Goose, Stolichnaya....have a martini while you are watching the Apprentice.

Boulevard Single Wide IPA...$6.89 / 6pk
Kansas City, Missouri
"The latest addition to the Boulevard family of year-around beers, Single-Wide I.P.A. is our take on a style that originated in 18th century Great Britain. This American version -- inspired by our Smokestack Series Double-Wide I.P.A. -- boasts a heady combination of six varieties of hops, some of which were employed for dry-hopping. SENSORY DESCRIPTION: Slightly hazy, golden bronze in appearance. Aroma is flowery, with hints of citrus and fresh mown hay. Assertive hop signature, yet well balanced with a crisp, dry finish. PAIRINGS: Strong, spicy food (a classic with curry!); bold, sweet desserts like carrot cake. Milder blue cheeses such as Gorgonzola or Cambozola. -- brewery
Delicious, I have had it on draft a few times and I finally got a chance last night to drink a few bottles.
Posted by Paul Hayden at 9:02 AM No comments: 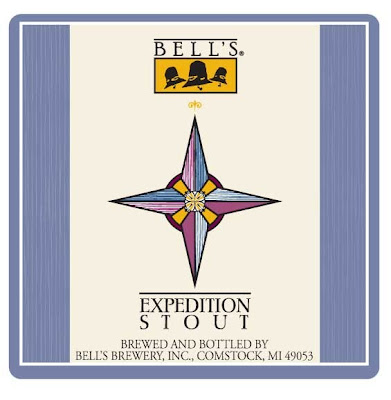 We will taste 6-8 beers (3oz pours) from the list below.
(I will guarantee that we will have the Black Albert (since it is considered to be one of the best) in the tasting, the rest will not be revealed)

Each person will rate them without any label influence. We will talley up the results and post them online. Don't worry, you do not have to be a professional, it will be fun and exciting. We will have tasting sheet guidelines. Seating will be limited to 20 people. This will be the test one and we will see how it goes and adjust the following ones if necessary. 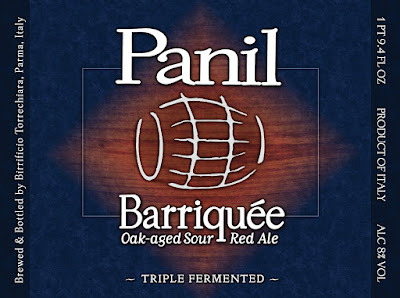 senseless abuse and pasteurization.
"Suddenly beer-lovers here in the States are all a-titter over dark, sour, wood-aged ales. These complex, fruity-tasting beers, native to the Netherlands and Belgian Flanders, represent one of the oldest beer styles in the world. In their traditional form, these Sour Reds – also known as ‘Flemish Red’ or ‘Oud Bruin’ beers – are related to real lambic beers: a touch of wild yeast and bacteria coming from the wood give acidity, both lactic (sour) and acetic (vinegar).
Trouble is, it’s become nearly impossible to find a true, traditional Sour Red, even in the place where the style was born. The spate of Sour Reds turning up here now leaves most drinkers crying in their beer. They’re too damned sweet! Crass commercialization has brought even the generally recognized ‘classics’ of the style to their knees. They’re pasteurized, and sometimes laced with sugar or artificial sweeteners to make them appealing to the less-discerning beer drinker. The traditional complexity, character, and dryness are missing in action. But now comes Panil Barriquée, and not a minute too soon. Barriquée is the only all-natural, traditionally-made example you will find today, and it comes from, of all places, Italy. This masterpiece is ‘triple-fermented.’ Primary fermentation is in stainless steel. The deep earthy, sour character results from three months of maturation in cognac barrels from Bordeaux, followed by re-fermentation and further aging in the bottle. Barriquée is not pasteurized or filtered, and no sweeteners are added, so it is uncompromisingly dry and complex, and endlessly interesting." -- importer
available on online if you do not live in the Lou
http://www.wineandcheeseplace.com/
Posted by Paul Hayden at 9:15 PM No comments:

There is a lot going on will Bell's right now, first Hopslam, Consecrator Doppelbock, Batch 9,000

coming soon, Oberon getting ready to be released in a few weeks. If you follow breweries and beer importers on twitter....just announced...
SBS Imports which brings in DePreof just announced on twitter that they are on their way to Belgium to start brewing the Bell's/De Proef Signature Series Collaboration. There is a lot of anticipation for this beer. Apparently we are told that it should be a September release, we will see how that goes.
The first two collaborations were very well received and are still available at our stores!

De Proef Signature Ale...$13.99 / 750ml
Collaboration with Tom Arthur, the head brewery, at The Lost Abbey and Port Brewing (not distributed in MO).
"A unique

De Proef Signature Ale Les Deux Brasseurs...$15.99 / 750ml
Collaboration with Allagash--we cannot get Allagash in Missouri
This is an exciting brewery and brew -- don't miss it!!
"Commercial Description: Golden ale Fermented with Multiple strains of B

rettanomyces yeast. Collaboration with Allagash"
Rated 98/100 percentile from http://www.ratebeer.com/
"Les Deux Brasseurs 8.5% abv. Our Brewmaster, Jason Perkins had the honor of traveling to Belgium in early March to collaborate on Les Deux Brasseurs with Dirk Naudts of De Proef Brouwerij. Les Deux Brasseurs meaning The Two Brewers; represents the joining of two cultures. Les Deux Brasseurs is a Golden Ale fermented with two strains of Brettanomyces. Our Brettanomyces, discovered and isolated at our location was flown in fresh for this special occasion. With Dirk’s favorite strain of Brettanomyces, the beer was brewed using Pilsner Malt and a small amount of Torrified Wheat. The Golden Ale was then hopped with German Hallertau and fermented and aged for four months. In the course of the brew it was dry hopped with Czech Saaz. The result is a beer of remarkable character with significant fruit tones, including; pear, apple and pineapple. This beer also produces the flavors of graham cracker, barnyard character and is rounded by an herbal spicy hop finish." -- Allagash Brewery
Posted by Paul Hayden at 5:17 AM No comments: