Provisions Gourmet Market
.....will be hosting a weekly beer tasting on Wednesdays!

Posted by Paul Hayden at 1:35 PM No comments: 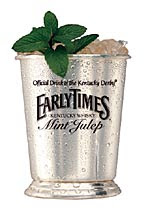 From the Kentucky Derby website...
The Grade II Early Times Mint Julep Stakes on May 24 at Churchill Downs is sponsored by Early Times, the time-honored ingredient in mixing an authentic mint julep. If the Early Times Mint Julep Ready-to-Serve Cocktail is not available from your local retailer, you can make your own with this recipe:
Early Times Mint Julep
2 cups sugar
2 cups water
Sprigs of fresh mint
Crushed ice
Early Times Kentucky Whisky
Silver Julep Cups
Make a simple syrup by boiling sugar and water together for five minutes. Cool and place in a covered container with six or eight sprigs of fresh mint, then refrigerate overnight. Make one julep at a time by filling a julep cup with crushed ice, adding one tablespoon mint syrup and two ounces of Early Times Kentucky Whisky. Stir rapidly with a spoon to frost the outside of the cup. Garnish with a sprig of fresh mint. 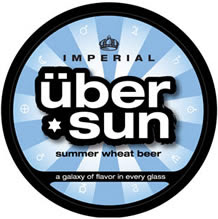 “a galaxy of taste in every bottle”
It is through the movement of the universe that life presents itself in transformation. It is in this spirit that we make ÜberSun, a tribute to the dynamic energy of summer. The alignment of wheat and barley through this hop-infused brew embodies the solar system itself... This may be a difficult task, but one our brewers revel in! They brew a galaxy of taste into every batch. ÜberSun is the ultimate experience that will challenge you with each sip. ÜberSun Imperial Summer Wheat Beer takes off where our Hop Sun finishes. Like it’s little brother, ÜberSun is clean and full of flavor, but don’t pull an Icarus– this is one big beer! Pour a glass or drink straight from the bottle, it’s meant to be consumed wisely with friends between summer solstice and autumnal equniox." -- brewery
8.0% abv • 5ºL • Imperial Summer Wheat Ale •

Posted by Paul Hayden at 3:15 PM No comments:

Tomorrow!!!!! Please come and bring your friends and try some amazing wines!
Adam Sbragia of Sbragia Family Vineyards is coming back to our store. 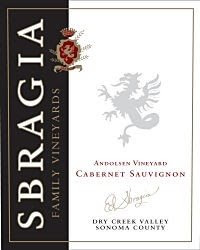 One of the greatest winemakers and one of the nicest people you will ever meet. Come taste some great wine and have him sign some bottles.

Almost all of these wines have scored 90 or higher!!

Posted by Paul Hayden at 1:18 PM No comments:

O'Fallon Brewery is apparently switching packaging away from 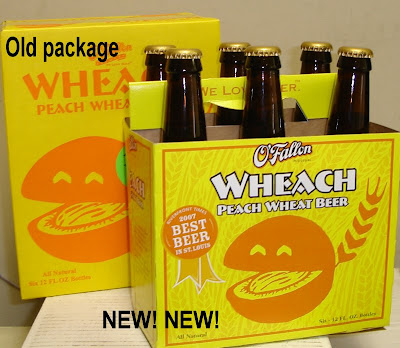 In stock now!
Arcadia Hop Rocket Imperial IPA
Bottled March 30, 2008
Most consider this to be Arcadia's best beer.
A- on BeerAdvocate
Rated 94 on RateBeer

"After 11 years of brewing beer with balance, our Brew Crew took a left turn with Hop Rocket Imperial IPA, a massive Imperial that focuses on the hops! At 111 IBUs, this huge ale Rockets off the charts with a massive nose of sticky, resinous hops and flavors of grapefruit, lemon peel, spruce, earthy mushrooms and dew-covered grass. While the focus truly is on the hops, a pleasant, sweet malt base backs the beer and balances it to a delicious level of drinkability with notes of toffee and freshly baked biscuits. This extraordinary Imperial IPA will age gracefully. Bitterness will become subdued and flavors will round out with age. A delicious brew for sipping, Hop Rocket will also pair nicely with many foods. Recommended Foods: India or Thai Cuisine, Chicken Marsala with Rosemary, Habanero Salsa, Gumbo, Carrot Cake, Pepper Jack Cheese" -- brewery
9.0% ABV
111 IBUs
Limited Release
Posted by Paul Hayden at 8:01 AM No comments:


They have recipes for both the beer and the cheese!
check out these great sounding recipes

"Covered with forests and pastures and crossed by numerous rivers, the countryside of Chimay has always been a livestock-rearing area. And dairy herds mean cheese! Since 1876, the Trappist monks of Scourmont have known the secrets of making this semi-hard cheese made from good milk from their farm and matured in the vaulted cellars of the abbey. Today, Chimay cheese is made exclusively with regional milk and the Trappist monks have modernised their production equipment. Technology has combined with tradition for the greater happiness of the connoisseur and Chimay cheese has adapted itself to high consumption whilst retaining its authenticity." -- Chimay

"A semi-hard pressed cheese, the rind is natural, non-coloured, without preservatives and slightly flowery. After maturing for four weeks, its creaminess and fine taste of good, fresh, creamy milk give it all its flavour." -- Chimay 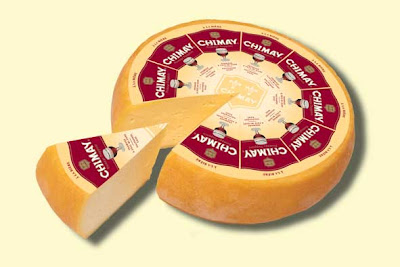 "From an unchanged ancient recipe, this cheese is produced from pasteurised milk. Its rind is natural and it is matured for six weeks which gives it its pure and mellow flavour." -- Chimay 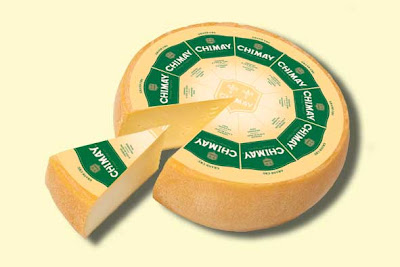 "The very personal preparation and maturing of this cheese make it an exclusive product. Its natural rind is bathed in Chimay Trappist beer so that its incomparable flavour flatters the palate and the nose." -- Chimay 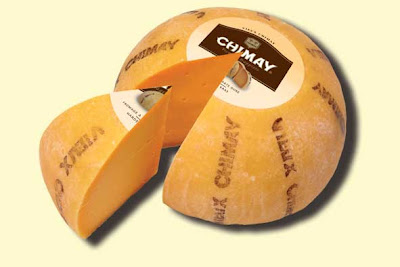 "The gourmet will appreciate the character of this hard cheese made with whole milk and formed through a long and careful period of maturing of a minimum of 6 months. It produces a fruity flavour which persists pleasantly in the mouth." -- Chimay 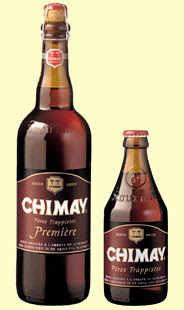 "Topped with a creamy head, it gives off a light, fruity apricot aroma produced by the fermentation. The taste perceived in the mouth is a balance confirming the fruity nuances noticed in the fragrance. Its taste, which imparts a silky sensation to the tongue, is made refreshing by a light touch of bitterness. To the palate, the taster perceives a pleasant astringency which complements the flavour qualities of this beer very harmoniously. This top fermented Trappist beer, refermented in the bottle, is not pasteurised." -- Chimay 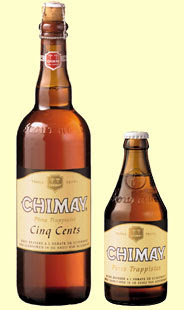 "Named Cinq Cents, this beer with its typical golden colour, its slightly hazy appearance and its fine head is especially characterised by its aroma which results from an agreeable combination of fresh hops and yeast. The beer's flavour, as sensed in the mouth, comes from the smell of hops: above all it is the fruity notes of muscat and raisins that give this beer a particularly attractive aroma. The aroma complements the touch of bitterness. There is no acidity, but an after-bitterness which melts in the mouth.
This top fermented Trappist beer, refermented in the bottle, is not pasteurised." -- Chimay 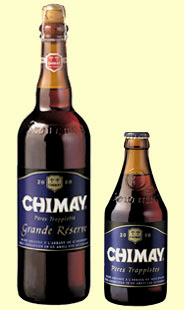 "Named Grande Réserve, it is principally distinguished by its character of a strong beer. This is a beer whose fragrance of fresh yeast with a light, flowery rosy touch is especially pleasant. Its flavour, noticed when tasting it, only accentuates the pleasant sensations perceived in the aroma , while revealing a light but pleasant touch of roasted malt. This top fermented Trappist beer, refermented in the bottle, is not pasteurised." -- Chimay


Chimay Blue 2008 Magnum
"If you think that Magnum is just a Chimay Blue in a 150 cl (51 fl.oz.) bottle, you are forgetting one essential fact, for it is important to appreciate that a large volume of beer affects the development of taste in the second fermentation of the beer in the bottle and gives it a fuller and smoother character. A vintage like its little sisters of 33 (11.2 fl.oz.) and 75 cl (25.4 fl.oz.), Magnum Grande Réserve may be conserved in dark conditions for several years. This is how the beer acquires a light and pleasant taste of port. Convivial and festive, the Magnum is a must for the connoisseur." -- Chimay
Posted by Paul Hayden at 1:52 PM 1 comment: