A couple of new Missouri beer labels approved
Cannot wait until we see them and taste them!! 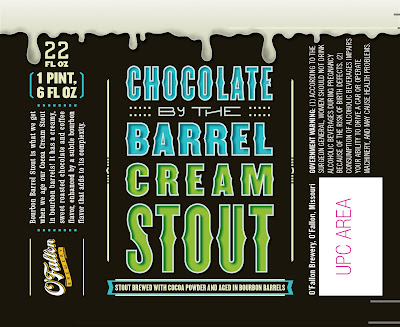 
O'Fallon Chocolate by the Barrel Cream Stout
Stout brewed with cocoa powder and aged in bourbon barrels. O'Fallon is expecting about 80 cases of 12/22oz bottles. Release date in about 2-4 weeks?


"Bourbon Barrel Stout is what we got when we aged our Cocoa Cream Stout in bourbon barrels. It has a creamy, sweat roasted chocolate and coffee flavor enhanced by sublte bourbon flavor that adds to it complexity." -- from the label


A couple of new ones from Charleville
Charleville Explicit APA 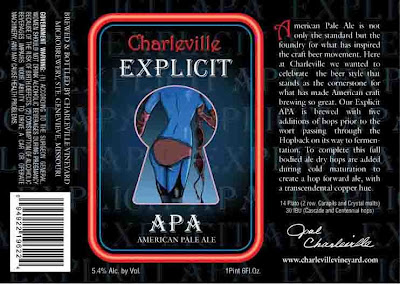 "American Pale Ale is not only the standard, but the foundry for what has inspired the craft beer movement. Here at Charleville we wanted to celebrate the beer style that stands as the cornerstone for what has made American craft brewing so great. Our Explicit APA is brewed with five addtions of hops prior to the wort passing through the Hopback on its way to fermentation. To complete this full bodied ale dry hops are added during cold maturation to creat a hop forward ale, with a transcendental copper hue" -- Charleville 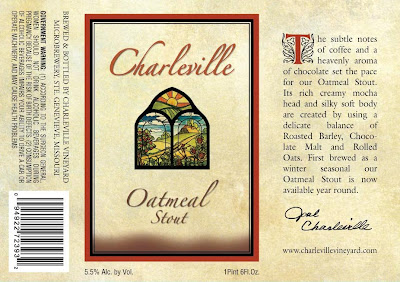 "The subtle notes of coffee and a heavenly aroma of chocolate set the pace for our Oatmeal Stout. Its rich creamy mocha head and silky soft body are created by using a delicate balance of roasted barley, chocolate malt and rolled oats. First brewed as a winter seasonal our Oatmeal stout is now available year round." -- Charleville

Posted by Paul Hayden at 9:28 PM No comments: 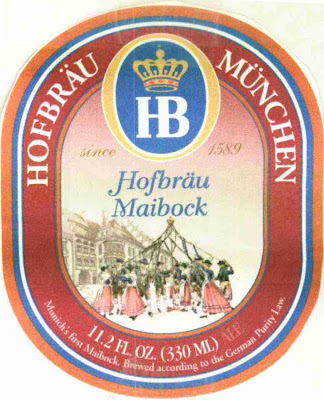 Quick note.....
I little late, but Hofbrau Maibock just arrived.
Good news since we only get a few German Maibocks in St. Louis.
Posted by Paul Hayden at 1:48 PM No comments:

The new O'Fallon 5 Day IPA is in the new package (the Wheach switched a few weeks back). With all the new beers coming to Missouri, do not forget the great O'Fallon beers. 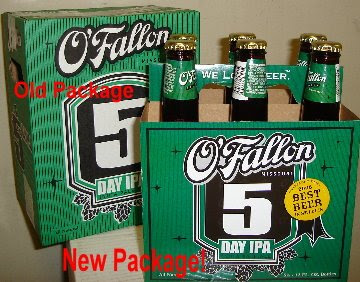 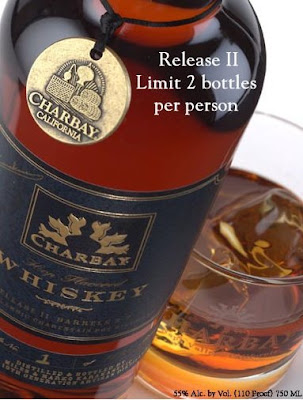 Only 124 cases made of this very rare whiskey.

"Did you know that whiskey is distilled from beer? Normally referred to as "low wash" or "distiller's beer," it's not something you'd reach for on a hot, sunny day. In 1999, our distillers, Miles & Marko, said, "What if?" They decided to distill 20,000 gallons of great Pilsner to create CHARBAY Whiskey. It took them 3.5 weeks of 24/7 distilling, taking shifts to check on the Pot Still every 3-4 hours.(One of the main reasons nearly all whiskey is column distilled.) In 2002, we released the first 2 barrels. Just 3 years old, it was dangerously smooth at cask strength (124.9 proof). Six years later, we're pleased to announce that Release II is ready!! Miles & Marko selected 5 barrels - 124 cases. "There is no other whiskey out that you can really taste the beer that it's made from," says Marko. "The spice from the hops and the barley flavors are very well balanced with just the right amount of oak." -- Charbay

“HOLY WOW! You have really outdone yourself, this release is absolutely amazing. This seriously might be one of the best made American Whiskies I have ever laid my lips on, and just ask my liver, I have had quite a few.” – Buyer/Morrell Wines & Spirits, NYC

Pictures from the Founders tasting -- 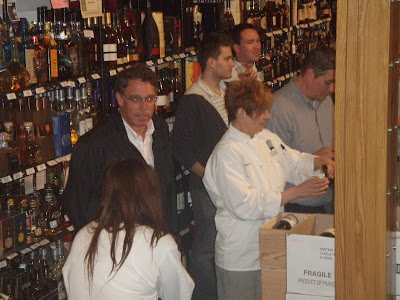 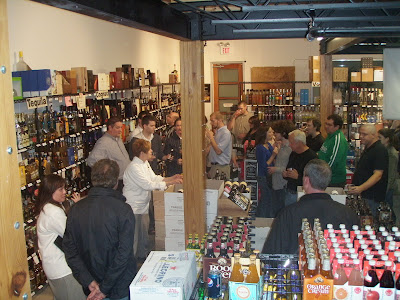 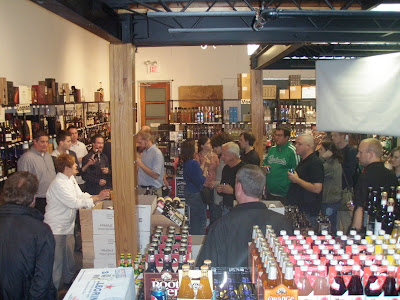 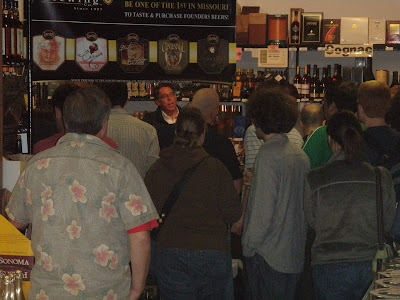 Posted by Paul Hayden at 9:42 PM No comments: 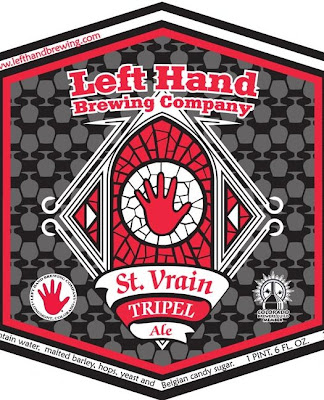 Left Hand St. Vrain Tripel
Only produced every other year.
"Also back from a 2-year hiatus is our limited edition St. Vrain Tripel Ale. If you’ve been out to the brewery, you must have seen the ‘raging’ mighty St. Vrain Creek that churns due west of the brewery in the shadow of the Rocky Mountains. Named after Ceran St. Vrain, an early settler to the valley who built a trading fort in the area. A reflection of this dedicated spirit can also be found in the beers of Belgium, where brewers, often monks, developed beer styles over the past 900 years of distinctive character. At 20.5 plato, St. Vrain is a classic Belgian Style Tripel. It’s beautifully light in color and lightly bittered with Spalt hops. A touch of sweetness from clear Belgian candy sugar tempers the warm spiciness hidden within beers of this gravity. To maximize authenticity, the entire brewing staff shaved their heads and bathed in baptismal ecstasy on the banks of the St. Vrain. 9.0% ABV, 20 IBU’s." -- www.beernews.org

Great Success! Thanks to all that attended!
Why are we so excited about Founders?
Check out these ratings --

Don't forget the Party!
THIS Wednesday, June 3 -- Tasting of Founders Beers!
This is very exciting news for St. Louis!!

Founders "kick-off" party and tasting at

Michael Bell of Founders Brewing will be coming to our store—on Wednesday, June 3 at the Forsyth location.

Here is what we are scheduled to taste from Founders: 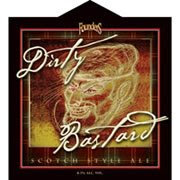 "Founders flagship beer. Dirty Bastard is an absolute beautiful beer to behold. Dark ruby in color and brewed with ten varieties of imported malts this beer continuously lives up to its reputation as a bold and powerful ale. Dirty Bastard is complex in the finish with hints of smoke and peat paired with a malty richness, finalized with a good bit of hop attitude. This beer ain't fer the wee lads" -- Founders
ABV = 8% 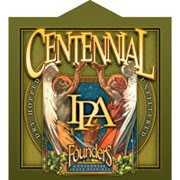 "Selected as a benchmark for the Beer Judge Certification Program used in all American based beer judgings. Centennial IPA has quickly become the IPA of choice. Pour yourself a pint of this complex flavorful ale and bask in the frothy head's floral bouquet. Relish the immense citrus accents, achieved by the abundance of dry hopping. This ale's sweet, malty undertones balance the hop character with a finish that never turns too bitter." -- Founders
ABV = 7.2% 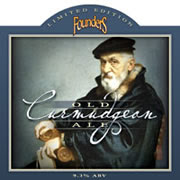 "This Old Ale conjures up thoughts of classic sea fairing ports, there local pubs and the weathered fisherman that frequent them. In traditional style Curmudgeon is brewed with an intense focus on the malt bill creating a very strong, rich, malty characteristic and a sweetness indicative of its cousin the barleywine. We are especially proud of the balance in this beer making it deceptively smooth and drinkable at 9.3% alcohol by volume. Specs: 9.3% ABV " -- Founders 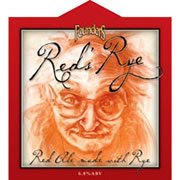 Almost forgot, that we got in the Ommegang Biere de Mars (lost in the shuffle of Moylans and Founders). We are actullay using it tonight in the beer and cheese class!! Cannot wait to taste it. I am actually sitting in the class tonight -- should be fun...

Here are the other matches we are doing tonight.

Posted by Paul Hayden at 1:15 PM No comments: 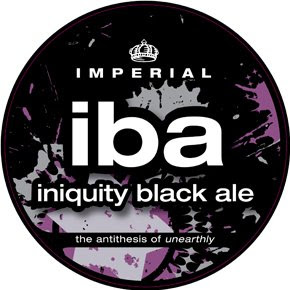 "The hexagram talisman has been used around the world for centuries to invoke magic and good luck. The six–point star is also the customary symbol of the brewer, representing the essential aspects of purity: water, hops, grain, malt, yeast, and of course, the brewer. Wishes of good fortune often collaborate with the brewer’s creativity to yield dramatic results. We carefully chose the name for this Imperial India Black Ale, Iniquity – a word opposing goodness. Why? This beer is contrary to what one may expect from an IPA; this is an ale as black as night. It is the antithesis of Unearthly. Some may consider it an immoral act to blacken an ale. We suggest they don’t rely on conventional standards. Allow the darkness to consume you. Cheers!" -- brewery Cheers!
9.0% abv • Imperial Black Ale
Rated 97 Percentile on Ratebeer.com
Rated A- on BeerAdvocate.com
Posted by Paul Hayden at 1:35 PM No comments: