Boulevard and Orval!! It is true

The rumor is true:

The official press release:
Boulevard To Collaborate With International Brewer
Brewmasters will partner on new Smokestack Series offering
KANSAS CITY, Mo., October 9, 2009 – Boulevard Brewing Company today announced that Jean-Marie Rock, brewmaster at Orval, the renowned Trappist brewery located in southern Belgium, will team up with Boulevard brewmaster Steven Pauwels to create a small production, limited release beer. The joint effort, a first for the Midwestern craft brewery, will take place during Rock’s late October visit to Boulevard’s Kansas City facility.
The brewers, both native Belgians, will produce an Imperial Pilsner similar to a lager brewed by Rock at the start of his career. It will, according to Pauwels, be a tribute to Pilsner beers; full flavored and refreshing, brewed with 100% Pilsner malt and 100% Saaz hops, using time-honored techniques. “The beer will be made in a very traditional way,” said Rock. “The methods by which it will be brewed, fermented, and lagered are no longer employed, though they made this beer fantastic. It is time to get a beer like this back in a glass.”
For his part, Pauwels is thrilled by the chance to work with his notable colleague. “In this, Boulevard’s first collaborative effort, we are pleased to honor a brewer who has had such an enormous influence on me and on so many other craft brewers. Jean-Marie mastered dry hopping and brewing with wild yeast long before craft brewers began experimenting with the techniques here in the U.S.”
The beer, to be packaged in 750ml bottles as part of Boulevard’s Smokestack Series, is expected to be available in January, and will be distributed through Boulevard’s wholesaler network.

About Boulevard Brewing Company
Boulevard Brewing Company has grown to be the largest specialty brewer in the Midwest, dedicated to the craft of producing fresh, flavorful beers using traditional ingredients and the best of both old and new brewing techniques. Boulevard’s portfolio of six year-round and five seasonal beers are available in a 17-state region stretching from Utah to Alabama, and from North Dakota to Texas.
Brewers Fact Sheet
Jean-Marie Rock, Brewmaster, Orval 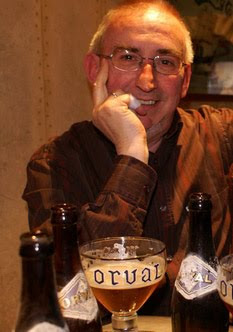 As brewmaster for one of the world’s most revered and recognizable beers, Jean-Marie Rock is responsible for maintaining a centuries-old brewing tradition in an era of constant global change. The Trappist beers of Orval have retained a unique position of honor for many years, as trends in brewing and – and in beer drinking – have come and gone. Since joining the brewery in 1985, Rock has remained committed to investing in technology to improve the beer’s quality, without compromising its remarkable character.
A 1972 graduate of Vrije Universiteit in Brussels, Rock holds a degree in Brewing Engineering. He later earned an MBA from Université Catholique de Louvain in Louvain-la-Neuve, Belgium. Rock’s career began at Palm Breweries in Steenhuffel, Belgium where he worked from 1972 to 1980. He then spent five years with Lamot Brewery in Mechelen before joining Orval in 1985. 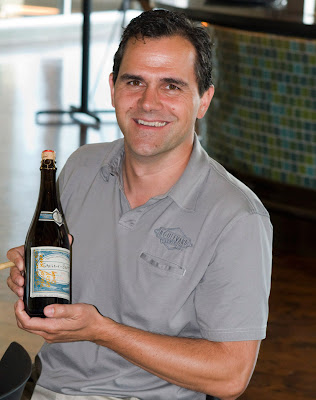 Boulevard Brewing Company
During his decade at Boulevard Brewing Company, Steven Pauwels has overseen all aspects of brewing and quality control as the regional craft brewer’s sales have more than tripled, to over 143,000 barrels in 2009. Pauwels is also responsible for 13 additions to Boulevard’s brand lineup, including the critically acclaimed Smokestack Series line of artisanal beers. Pauwels grew up steeped in the brewing industry. His first stint in the business came with summer work at his hometown brewery, Eeklo’s Brouwerij Krüger, where his father held a job. After receiving degrees in Biochemical Engineering from KaHo Sint-Lieven and in Business Administration from Mercator, both in Ghent, Belgium, he held positions at the Domus brewpub in Louvain and at RIVA brewery in Dentergem. The transplanted brewmaster has received international recognition for his beers, most recently in the form of a gold medal at the 2009 Great American Beer Festival for Boulevard’s summer seasonal, ZŌN Belgian-style Witbier.
Posted by Paul Hayden at 11:49 AM No comments:

Collaboration with Missouri's own Boulevard?

The brewmaster for Boulevard was in St. Louis not too long ago and mentioned that they were doing a collaboration with another brewery -- he would not divulge any more details. I asked him: was it with another American craft brewer? European? He would not say.
And then this week --
Jean-Marie Rock was in Kansas City visiting the brewery? Could that be the collaboration? Jean-Marie Rock, the brewmaster of the famous trappist brewery -- ORVAL? Boulevard would not confirm the rumor. We will have to wait and see, but that would be one exciting collaboration!

Right now, you can enjoy the great beers separately:
If you have not had Orval -- give one a try - very delicious!
Orval Trappist Ale 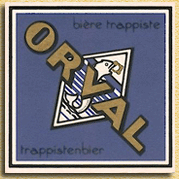 We scored one more case ---

Beer Style: Barrel-Aged Wild Ale
Alcohol By Volume: 8.7%
"Experimentation. Ales and lagers that defy styles or categories. This is what we are about: our driving force, our passion. To further facilitate this innovative spirit, we've developed our Barrel-Aged Series, where anything, and we mean ANYTHING, goes! Brewed for those as adventurous as we are!
No. 1 Brabant is a luscious dark ale fermented with two strains of wild yeast (brettanomyces) then aged for 8 months in Zinfandel barrels. We hope you enjoy sifting through the vast layers of complexity in this mysterious ale." -- brewery

Rated 95 percentile on RateBeer
Rated A- on BeerAdvocate

order online now
Posted by Paul Hayden at 9:15 AM No comments:

Founders's Harvest Ale is back in stock now!!

Morland Hen's Tooth Ale...$3.49 / pint
Bottle Conditioned English Ale
"There's only one description for Hen's Tooth – the nearest thing to real ale in a bottle. Its balanced blend of strong, rich flavours (6.5% abv) leads to a satisfyingly smooth, clean finish. The active yeast in the bottle continues to condition and mature the ale through its life, producing not only the wonderful flavours but also a smooth, foamy head." -- brewery

Alc.6.7% vol.
Raw materials of excellent quality are the richness of this beer blonde high-fermentation.


Taste: abbey beer with a golden ocher, slightly fruity with a nice balance between sweetness and bitterness and a full, rounded flavor pronounced.
The Council Gourmet


Perfect for the BBQ and white meat like chicken or turkey. Also delicious with good Belgian mussels!

Alc.6.5% vol.
The mixture of different malts and a second fermentation equip the Double Grimbergen a typical dark color and a generous taste.


Taste: the bitterness introduced already in the aroma, comes completely forward in the aftertaste. Considered one of the top Pilsners during the Michael Jackson International Pilsner tasting in Beer Passion Magazine, autumn 2000, where 27 Pilsners from around the world were ‘blind’ tasted and compared.


info from importer
Posted by Paul Hayden at 7:39 AM No comments:

It was nice to meet Adam Avery tonight at the store:

I thought it might be nice to remind people about their great beers since he took the time to travel to St. Louis.

Avery Beers have been in St. Louis for just over a year now! 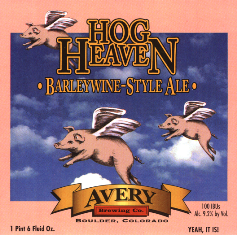 This dangerously drinkable garnet beauty is a hop lover's delight. The intense dry-hop nose and the alcohol content are perfectly balanced for a caramel candy-like malt finish. This is a serious beer for serious beer afficianados and it only gets better with age. Cellarable for 3 years.

The Reverend, was created in tribute to the life of Sales Mgr. Tom Boogaard's grandfather, an ordained Episcopal Reverend. Tom was inspired by the life of his grandfather and wanted to create a tribute beer that contained his sterling traits. True to both our "small brewery, BIG BEERS" philosophy and to the spirit and character of the departed Reverend, this beer is strong willed, assertive, and pure of heart, a heart of candy sugar. It contains as many authentic imported Belgian specialty malts as the brewers could cram into our mash tun, and lots of Belgian dark candy sugar stirred into the brew kettle. A divinely complex and beautifully layered beer with hints of dark cherries, currants, and molasses, complimented by an underlying spiciness. Sinfully smooth considering the high alcohol content. Cellarable for up to 4 years.

The success of Hog Heaven and The Reverend clearly demonstrates that beer drinkers are willing to embrace "BIGGER" beers. In the fall of 2001, we decided that a lighter BIG BEER would complement its darker colored predecessors. Salvation has luscious apricot and peach aromas delicately interwoven with spicy suggestions of nutmeg and cinnamon. This heavenly soft, champagne-like elixer is cellarable for 3 years.
Posted by Paul Hayden at 10:21 PM No comments:

Mephistopheles is the crafty shape shifter, the second fallen angel. Amazingly complex, coal black, velvety and liqueurish, this demon has a bouquet of vine-ripened grapes, anise and chocolate covered cherries with flavors of rum-soaked caramelized dark fruits and a double espresso finish. IBU's 107.
Mephistopheles is the final installment of “The Demons of Ale” series.

The Beast is a seducer - accomodating, complicated, powerful, dark and created to last the ages. With a deep burgundy color and aromas of honey, nutmeg, mandarin orange and pineapple, this massive and challenging brew has flavors akin to a beautiful Carribean rum. Dates, plums, raisins and molasses are dominant in a rich vinous texture. Cellarable for 10+ years.

Samael’s Ale is a super-caramelly, oak aged English-style strong ale. Perhaps the least hoppy (sacrilege here at Avery!!) beer we’ve brewed, to accentuate the malt. The oak is very apparent in this rich and high gravity ale, adding additional depth and complexity with a woody and cask-like nose and a pronounced vanilla flavor on the palate. Notes for 2007 - With the addition of an additional roasted malt, Samael's now delivers subtle bitterness to add balance to the natural sweetness.