And one of the big changes...
Founders Red's Rye PA will no longer be a year round brew.  After February, it will switch to only being available in September and October.   It will be switching to 4 packs and only available for 2 months out of the year.

Enjoy it now while it is in 6 packs until February.

Most noticeably, Red’s Rye PA will only be available on draft year-round, beginning in March or April of 2013. Our bottle release will be limited to a specialty, four-pack release in September and October. The final Red’s Rye PA six-pack batch will ship in February 2013.

This was a hard decision for us to make. We love Red’s Rye PA, and we do not want to limit its availability, but it’s the right thing to do for the sake of the quality of the beer. Red’s Rye PA carries a shelf life of 90 days, which means it is tied with Harvest Ale for having the shortest shelf life of any of our brands. Extensive lab analyses have been conducted, and they have validated this shelf life again and again.

This limited shelf life holds true for Red’s Rye PA in bottles and Red’s Rye PA in kegs; however, the out-of-code Red’s Rye PA that we’ve found in the market has overwhelmingly been bottles. This is mostly because kegs have a faster sell-through rate, but draft has other built-in shelf life benefits such as constant refrigeration and a totally concealed container that protects the beer from light exposure.

By shortening Red’s Rye PA’s period of availability, we alleviate shelf life concerns due to the shorter window of availability. Specialty beers tend to have a much faster sell-through rate than seasonal and year-round beers.

We aren’t taking this decision lightly. We discussed modifying the Red’s Rye PA recipe to extend the shelf life, and researched it for some time, but it simply wouldn’t be the same beer. As difficult as this is, we aren’t willing to compromise our recipe and a beer that we believe in just to get it on the shelves longer.

Finally, by moving Red’s Rye PA into the specialty category, it will be moved from a six-pack to a four-pack package, and the price per bottle will increase. Red’s Rye PA has always been an expensive beer for us to make; its cost is more in-line with our specialty beers, but we blended our margins for years to try to make it work. In the end, we’ve had to accept that this is the right thing to do for one of our greatest beers. As is always the case at Founders, producing quality beer comes ahead of concerns about profits.
Posted by Paul Hayden at 10:39 PM No comments: 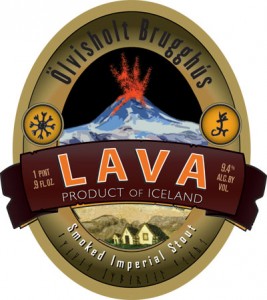 "TAKE YOUR TONGUE ON A TRIP TO THE ARCTIC ISLE’S RING OF FIRE WITH LAVA SMOKED IMPERIAL STOUT (9.4% ABV). IT WILL SKÁL ÞIG YFIR (BOWL YOU OVER)."Lava is a full-bodied, pitch-black beer with a dense brown head. It is richly flavored with notes of dark chocolate, rummy plum, roasted malt, espresso and lactose, with birch smoke in the finish. Lava is highly sought after by Scandinavian beer geeks. Taste it and you will understand why.
Lew Bryson recently gave a wonderful review of Lava. He notes:
“Smoked imperial Stout from one of Iceland’s handful of breweries. Weighty look to it, rich beechwood smoke aromas. Delicious smoke flavors permeate a medium-weight body, surprising notes and even some berry flashes near the end. The finish reveals the bitterness, leaving a clean bite of smoke and fruit at the end. Lush flavors, but not heavy; a smoky dessert.”

This fantastic beer was also featured on Martha Stewart TV.
GREAT WITH FOOD!

You might like to get to know Icelandic foods to pair with the beer: oysters, lobster and crayfish, arctic char, herring, sea urchin, halibut, gravlax, lamb, reindeer, rabbit and shark.

Last winter, we went to Oslo, Norway for a long weekend. There, fast friends and key operatives in the craft beer scene introduced us to a beer they loved from Iceland’s only craft brewery, Olvisholt Brugghus. We loved it too. And so began an odyssey to find the brewer and bring back his delicious beer to you. We went to Iceland in September and the combined effect of Iceland’s raw natural beauty and Jon Gunnlauggson’s talent as a farmstead brewer – on a wild and lonely heath facing an active volcano – was utterly stunning and inspiring. And so is the Olvisholt story:

The brewery opened on Jon’s family dairy farm in 2008. The day before the official inauguration, an earthquake, registering 6.1 on the Richter scale, shocked Southern Iceland. The full combi tanks were swayed side to side, but the equipment withstood the tremor. Visitors at the opening said the brewers must be in contact with the Nordic gods since their first beer, Skalfti, means earthquake. Next came Lava… and Eyjafjallajokull – the volcano that erupted and halted all air traffic across Northern Europe. Hmm…
importer
Posted by Paul Hayden at 9:17 PM No comments:

20. Anchor Our Special Ale 2012* (just a few magnums left)
No surprise to see this fall-winter standby return from a one-year break from this list. Earthy, roasty flavors mingle in this spiced dark ale.

18. Ska Autumnal Molé Stout* (in stock now)
Colorado’s Ska Brewing Co. kicked off its new seasonal stout series with the September release of Autumnal Molé. Hatch green chiles counter the stout’s sweetness with just the right dose of heat. The next release in the series, a wood-aged stout brewed with malbec grapes, is due out this week.

14. Boulevard 80-Acre Hoppy Wheat* (in stock now)
When Kansas City’s Boulevard Brewing unveiled its new year-round beer in August, I wrote that 80-Acre had the potential to become a staple in my fridge. Four months later, with its fruity hop character and refreshing wheat base, it’s a mainstay.

11. 4 Hands Cuvee Ange* (sold out)
Brewed with raspberries and blackberries and aged in merlot, cabernet and grenache barrels, Cuvee Ange is a beautiful expression of bright fruit, tannic wood and tart funk. A small-batch release got scooped up quickly in September, leaving St. Louis beer fans begging: Do it again!

10. Samuel Adams Thirteenth Hour* (in stock now)
A blend of 13 ingredients goes into this Belgian-style stout, which was the best thing I tasted this year from the prolific Boston Beer Co. The standout ingredient? Kosmic Mother Funk, a proprietary oak-aged beer that gives Thirteenth Hour touches of black pepper, acid and caramelized fruit.

7. Odell the Meddler* (in stock now)
Wild yeasts “meddle” with several generations of wood-aged brown ale to create the Meddler. The beer is Colorado’s Odell Brewing Co.’s nod to Flemish sour ales and their symphony of sweet and tart flavors.

3. 4 Hands Prussia* (sold out)
These Top Three could really go in any order, but rankings are rankings, so No. 3 is Prussia, a hazy, fresh-tasting, low-alcohol Berliner weisse that I couldn’t get enough of this summer. Look forward to its return this summer; I know I am.

1. Stone 16th Anniversary IPA* (sold out)
The brash brewers at Stone cranked out a double IPA this summer for the brewery’s 16th anniversary. At 10 percent ABV, Stone 16th Anniversary IPA has spicy notes from an addition of rye malt and tropical notes from Calypso hops. But its knockout ingredient is lemon verbena, which infuses the brew with the unmistakable fragrance and flavor of lemon oil. Exceptional beer.
Posted by Paul Hayden at 9:10 PM No comments:

We still have these beers from the list in stock now!


Wookey Jack | Firestone Walker Brewing Co. | Specialty Beer
This black IPA delves deep into the world of dark grains without ever losing its composure. A thoughtfully smooth, chocolate and roasted malt base is the perfect stage for the hops’ juicy orange and tangerine, while the clever use of a black wheat malt and two types of rye elevates the swallow with a
playfully edgy, spicy kick. It’s big (8.3% ABV), it’s bitter (80 IBUs), and it’s the best black IPA we’ve had to date.

Lava | Ölvisholt Brugghús | Smoked BeerStraight from a tiny farmhouse brewery in Iceland, the newly imported Lava does the land of volcanoes justice: Rustic birch smoke permeates this chewy beer’s roasted malts, rich chocolate, dark cherry and raisin, while a frisky 9.5% ABV lightly singes the back of the throat. Its complex depth and noticeable brawn make for a perfect snifter on a blustery winter night—absolutely fitting, considering its origin.

Milk Stout Nitro | Left Hand Brewing Co. | Sweet Stout
The year began with Left Hand setting its sights on a certain ubiquitous Irish beer when it reimagined its classic Milk Stout by bottling it with a proprietary nitrogen system instead of the widget you find in other stouts. The brewery’s kept the science close to its vest, but we do know this: The ultravelvety version of the original mocha-and-chocolate-packed ale exceeds what we’ve always considered one of the best stouts in America.

Zwickel | Urban Chestnut Brewing Co. | Zwickelbier
Urban Chestnut’s zwickelbier brings the nearly forgotten German style (it predates the pilsner!) back to life with perfection. This 19th-century spin-off of the kellerbier reminds us just how charming a lager can be: Fluffy and bready with a snappy, grain-driven finish, Zwickel’s a premier example of honest, simple beer refreshment.

These we had earlier in the year, but are sold out now
Bacon Maple Ale | Rogue Ales | Specialty BeerIt was the year’s most divisive beer, and we couldn’t get enough. The concept: recreate Portland, Ore.-based Voodoo Doughnut’s Bacon Maple Bar in a bright pink bottle. A staggering list of ingredients included seven malts (three of them smoked), bacon and pure maple flavoring, yielding a spot-on profile of doughy bread, molasses and smoky bacon—and the most decadent foodie beer of 2012.
Prunus Saison | 4 Hands Brewing Co. | Fruit Beer
As powerful, enamel-erasing sours continue to trend, subtlety is just what the dentist ordered. This new St. Louis brewery delivered with its first (and our favorite) spring seasonal release, a saison brewed with sour cherries. This fluffy brew’s effortless fusion of gentle tart cherry with playful black pepper and clove was a revelation; delicate, refined and incredibly quaffable, Prunus is flawless.
16th Anniversary IPA | Stone Brewing Co. | Specialty Beer
Stone unleashed a slew of hoppy brews this year—Ruination 10th Anniversary IPA, Bottleworks 13th Anniversary Ale and the potentially game-changing Enjoy By IPA—but it was the brewery’s 16th Anniversary IPA that left us speechless. An imperial IPA at heart, additions of lemon verbena, lemon oil and
a dash of rye malt created a ridiculously enjoyable, razor-sharp profile backed by the biggest, sunniest swell of lemon we’ve ever tasted in an IPA. This beer draws a new line for imperial IPA intensity.

Love Child No. 2 | Boulevard Brewing Co. | Specialty Beer
Brewed with Brettanomyces, Lactobacillus and aged in bourbon casks, Boulevard’s first wide-release wild ale is the most intensely sour beer we sipped this year. Big cherry and fierce sour swells roll back in waves; hints of bourbon and barnyard funk add incredible complexity. It took the brewery eight years of experimentation to get into the wild ale game, and its debut is a reflection of uncompromising effort.
Posted by Paul Hayden at 9:04 PM No comments: