Many new beers have arrived, some are repeats of limited beers that we sold out of before.
Available at Forsyth and Rock Hill, unless noted. (ask at Rock Hill, they still might be in the boxes)
These beers are hard to get and very limited! Don't miss out.
De Molen Rasputin - (Forsyth only)
Just received a new batch. Only 380 bottles made. Limit 1 bottle per person.
(previous batch - sold out)
De Molen Storm & Averij
We just received another case.

Our second bottling has arrived of the two De Molen brews! Do not miss it this time!

De Molen Rasputin Russian Imperial Stout...$21.99 / 25oz btl
A very small production stout that comes in a vintage looking label and it is corked finished like Champange and then covered in black wax. Very nice packaging.

The front label gives you all this information:
Handcrafted Beer
Brewed May 15, 2008
Bottled June 3, 2008
only 380 BOTTLES made this batch and each bottle numbered
This beer can age for 25 years

"The most notable beer of the bunch coming overseas is the Rasputin Imperial Stout. According to British Guild of Beer Writer and beer blogger, Ron Pattinson, “[the brewer, Menno] brews it just once a year in very limited quantities. It’s wonderful stuff. You have about two weeks to get to Bodegraven, judging by the depleted shelves, if you want to try the 2007 vintage.” The label (see below) shows that the batch was only large enough to fit 499 bottles. It has not been confirmed whether all bottles will be hitting the states." -- http://www.beernews.org/

"Storm and Damage"
9.2% Alcohol.
Made in small batches, only 650 bottles made each time. This is their Imperial Double IPA. Rated 94 percentile on www.ratebeer.com

Rated "A" on www.beeradvocate.com
Posted by Paul Hayden at 9:00 AM No comments: 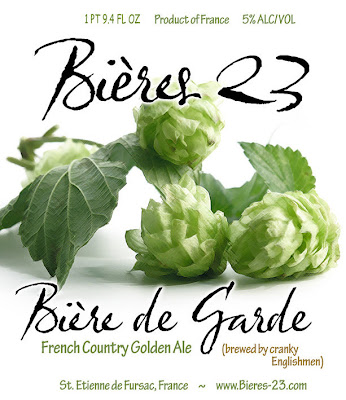 Bières23 - Brasserie Artisanale
"Brewed by a cranky Englishman" -- brewer
Bieres23 Bier de Mars....$11.99
French Golden Farmhouse Ale
"Micro brewery in la Creuse, Limousin.
Welcome to Bières23, named to match the departmental number 23 of the Creuse. We are located in St. Etienne de Fursac, a small town that sits astride the river Gartempe, about ten kilometres south of the town of La Souterraine and within an hour of the spectacular city of Limoges.
Award Winning Beers
After many years of brewing award winning beers in England we have moved over to La Creuse in the beautiful Limousin region of France and created Bières23. As devotees of artisan brewing our aim at Bières23 is to produce both Continental and English style beers by the high fermentation method, using only the finest natural ingredients, water, malt, hops and yeast." -- brewery
Bieres23 website


A Little Bit About Us Here At Bières23
By John Davidson (Brew master)
"I taught myself brewing from books and asking questions. Like a lot of people I started with home brewing when my children were growing up. The next step was to learn more about the art of brewing, which enabled me to turn my hobby into a very successful business. My wife and I started Swale Brewery in Sittingbourne in 1995 and then moved to Grafty Green near Maidstone at the end of 2001. We exported our award winning beer to America, Sweden and Denmark."

"Saisons are sturdy farmhouse ale that was traditionally brewed in the winter, to be consumed throughout the summer months. Not so long ago it was close to being an endangered style, but over recent years there's been a massive revival; especially in the US. This is a very complex style, many are very fruit in the aroma and flavor. Look for earthy yeast tones, mild to moderate tartness. Lot of spice and with a medium bitterness. They tend to be semi-dry with many only having touch of sweetness." -- http://www.beeradvocate.com/
Posted by Paul Hayden at 11:14 AM 3 comments:

Cantillon Lou Pepe Geuze
2005 Vintage...$21.99 / 750ml
"The traditional Lambic is a beer whose spontaneous fermentation cannot be controlled entirely by the brewer. Due to the influence of many factors, the taste and the aromas of our product are different every time we brew.
In a lambic brewery, every bottling (about 50 each season at the Cantillon brewery) results in a beer with its own more or less complex taste. These differences are one of the characteristics of the Gueuze, Kriek or Framboise. The lambic beers are blended in order to neutralize these differences and to be able to offer our customers a beer with a harmonious taste the whole season through.

The Lou Pepe beers deviate from these principles. The Gueuze Lou Pepe is made with two years old lambic beers with a mellow taste, often coming from barrels in which only wine has been kept before. In July, the same kind of beer is used to make the Lou Pepe Kriek and Framboise. With these beers too, the fruits are soaked in barrels coming directly from Bordeaux.
The second fermentation of these particular beers is not caused by the addition of young lambic but of a sweet liquor. The yeast will transform the sugar in carbon dioxide. All the lambic beers which are used, are brewed in the same season and the use of liquor instead of young lambic makes the taste of the fruit more intense. The Kriek and the Rosé de Gambrinus contain 200 g of fruits per liter on an average, while the Lou Pepe beers contain about 300 g. This fruity taste, combined with the wine flavour coming from the Bordeaux barrels, distinguishes these special beers from the other Cantillon products.
The particular name of these beers comes from the south-west of France, a region the Cantillon family is very fond of. In this beautiful region, the grandfather is called Lou Pepe. To his grandchildren Florian, Simon, Louis and Sylvain, the master-brewer is the Lou Pepe of the North."
---brewery
Posted by Paul Hayden at 7:24 AM No comments: