We just bought our own barrel of Four Roses at BARREL STRENGTH.  This is the only way you can get this rare barrel strength Bourbon.  We have 156 bottles of this wonderful Bourbon.  (The same recipe used for the 2011 Small Batch Limited Edition!)
Four Roses Single Barrel – Barrel Strength
From time to time, a limited number of exceptionally smooth and complex barrels from any or all of our 10 Bourbon recipes present themselves to our Master Distiller. Each barrel is aged between 8 and 10 years. We then invite our retailers to a private tasting and selection of their favorite barrels. Once chosen, each selection is bottled and private labeled as a non-chill filtered Single Barrel at Barrel Strength in limited quantities of approximately 200-230 bottles.

In stock at all locations - less than 36 bottles left 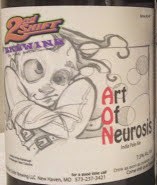 Posted by Paul Hayden at 8:20 AM No comments:

In stock now at Forsyth!

Founders Black Rye...$9.99 / 4pk
We’ve reached into the vault and pulled out a cult classic from years ago. Before Black IPAs were all the rage, we made a dry-hopped dark ale with copious amounts of rye malt. Black Rye is a perfectly balanced blend of German- and American-grown hops, premium 2-row barley and heavily kilned rye and wheat malts. As with many of our offerings, there’s no style category that can contain this beer. It’s an original.
ABV: 7.5%
IBUs: 78
Posted by Paul Hayden at 12:07 PM No comments:

Founders Imperial Stout...$10.99 / 4pk
Brewed with ten varieties of malted barley, this stout is smooth as silk, yet complex and rich in body. Serve this guy at cellar temperature. Put another log on the fire, sit back, and enjoy the friendship of this ultimate winter warmer.
ABV: 10.5%
IBUs: 90
Posted by Paul Hayden at 12:04 PM 5 comments: 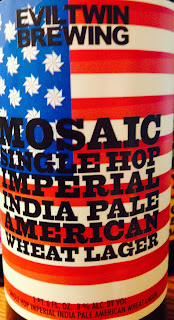 Posted by Paul Hayden at 3:02 PM No comments:

Very rare, only produced in Magnums!
We asked for 20 bottles :) but only got 4 2010 Pegau Chateauneuf du Pape Inspiration....$1,799.99  / MAGNUM
Still not in bottle, the 2010 Chateauneuf du Pape Inspiration is more sexy and perfumed than the Cuvee da Capo, with incredible notions of roasted meats, saddle leather, sweet currants and Provencal herbs all emerging from the glass. There’s a single barrel of this full-bodied, deeply concentrated elixir and I’ve no doubt it will be very hard to come by. In addition, this cuvee is only bottled in magnum. Nevertheless, it is spectacular, and I suspect will also have close to three decades of longevity.
Rated 98-100/100 The Wine Advocate

One of the rarest of scotches! 50 Years old!!

Only 388 bottles made for the world!

"The Last Drop is worth $4,000...is estimated to double its value in less than 5 years" - Pursuitist (click to read full article)

The story is compelling. In 1972, a batch of more than seventy malts and twelve grain whiskies were blended together and left to marry in sherry oak casks. Their intended destiny was to become an agreeable 12 year old blended Scotch whisky. Each of the constituent mature whiskies had been distilled between the 1940s and

1960. These days, we lament the loss of many of the distilleries where those historical liquids originated.
The sherry casks were disgorged for bottling and the contents consumed through the 1970s, around the dance floors of noisy clubs and across smoky public bars in provincial hotels. However, in the darkness of a warehouse at Auchentoshan distillery, three casks were overlooked, forgotten about for nearly four decades. By good fortune, they were uncovered by the gentlemen of The Last Drop Distillers Limited. They were astounded by the flavors and smoothness produced after this lengthy, inadvertent sherry maturation. Naturally, they set about acquiring the casks, subsequently releasing just 1,347 bottles. Back in 2008, The Last Drop 1960 was one of this magazine’s top ten whiskies of the year.
Guilefully (cognizant of the company name), they tactically reserved a quarter of the volume and risked re-casking it for further maturation in small, fresh sherry casks. After four years of careful observation, the youngest liquid in the blend had comfortably surpassed 50 years old. It was time to taste the results.
When I wrote my original review, I found a nose of maple syrup, roasted spices, pomegranate, cilantro, and mushrooms soaked with beefsteak juices. The luxurious mouthfeel oozed with malt, molasses, and sherry concluding with a dry, resinous finish. The amazement experienced in the texture and mouthfeel by those discerning drinkers who have developed their palates is something to behold. Be under no illusion: this is epic whisky.
While this blend was carefully selected for this award purely for its outstanding experiential qualities, there are only 388 bottles and the price tag cannot be ignored. Sure, it costs twice as much as The Last Drop 1960, but it is much scarcer: for every two bottles of 50 year old, there were seven bottles of 1960 released. Put it in context with the prices charged for some 50 year old single malt whiskies released in 2014, and this 50 year old blend of malts comes in at under one sixth of the price or less. Trust me, within the oeuvre of blended Scotch whisky, The Last Drop 50 year old is truly one of the greats. —Jonny McCormick

We have 4 of them in stock now!  The only place you will find them in Missouri. 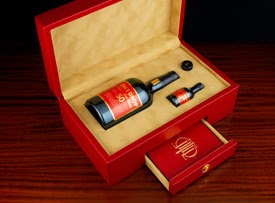 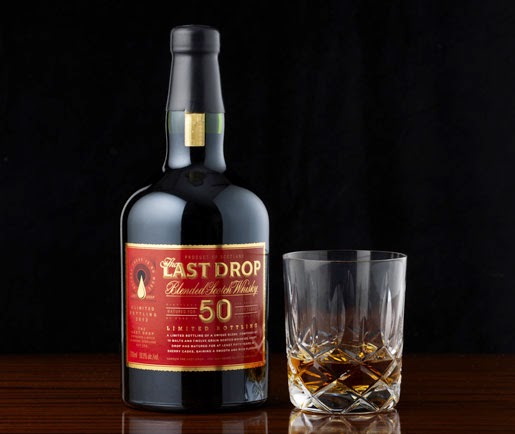 We now bring you the smallest offering of The Last Drop Distillers – only 388 bottles in all. Jim Murray awards it 96.5 – among the World’s top 20 whiskies. Award yourself this great experience, before there is no more.


This is a blend. Not just any blend. More than 82 whiskies went into the original marrying vat, 50 years ago, many from distilleries long ago closed and forgotten. For 12 years the blend matured, and then most was bottled and sold as a fine 12-year old whisky. However, the company forgot just three casks; they lay at the back of the warehouse, unnoticed, evaporating (the “angels’ share”), and developing an unequalled richness of nose and taste. It is from the very last of these barrels that The Last Drop 50 year old comes.


Bottled by hand and sealed with wax, your bottle of The Last Drop nestles in a luxurious red leather case, along with a 50 ml miniature, so that you can taste this magnificent liquid before you decide to open the bottle. You will also find within the box, a ‘secret drawer’ containing a signed and numbered, leather-bound book, certifying your bottle of The Last Drop 1950, and with room for you to write your own tasting notes as you explore this extraordinary blend.


Left unopened, your bottle of The Last Drop 50 year old can be kept for many lifetimes if you wish – it will not change. If you decide to open it, please enjoy it… until the very last drop! There will be no more. 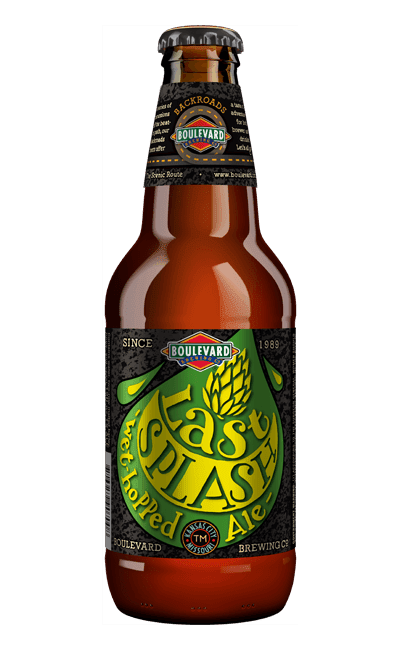 (van should be here by 11:30 for transfers, get your orders in soon for today transfers)

Style: Wet Hopped Pale Ale
Last Splash dips its toe into fresh hop flavor and aroma, employing wet Nugget hops straight from the field, along with Magnum, Cascade, Styrian Goldings, and Centennial. Delicate floral hop notes and a supporting dry bitterness are the result, balanced by a body of pale, pilsner, caramel, and Munich malts. C'mon in-the hops are fine!
Posted by Paul Hayden at 10:48 AM No comments: