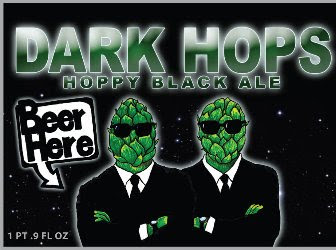 Beer Here was a big hit. Amazing beers and amazing brewery.
click here to read about the beers.

I found this recipe on their website. Brownies made for the kick off of their new beer. I had to use google translator to convert it from Danish to English. Then I converted deciliters to cups/ounces and even remembered to convert the 200 degrees celsius to farenheit. Hopefully it is all correct, it sounds very interesting, but a lot of work. Looks like homebrewers might have to make because you need hop pellets. Not sure if it is worth attempting or not??


Dark Brownies with Hops Glaze.
These Brownies use milk chocolate and white chocolate in the dough, because there will be plenty of bitterness from hops and beer glaze. It is also important to remember that it is subject to regular baking chocolate cake and brownies are letting their separate ways??. A brownie should only just be baked to achieve the soggy, sticky and candy-like texture.
Below bring them the recipe for the concentrated cake.

Approach
The day before, put hop pellets in water and put in fridge.
1-2 hops pellets retained to sprinkle.
Preheat oven for approx -- 390 degrees.
A roasting pan about 40x40 cm lined with baking paper.
All the wet ingredients should preferably be at room temperature.
Salt, cocoa powder and flour, mix thoroughly.
Melt butter with milk chocolate in the bath.
In a large bowl whip eggs with sugar until it is white and fluffy.
Chocolate / butter mixture, mixing here.
Then whisk flour mixture in with the beer.


The dough is poured into the lined baking pan and white chocolate chopped into coarse pieces sprinkled on top.
The cake is baked on the middle shelf until a match is inserted in comes out almost clean - but still sticky.
Cool completely before frosting.
Not sure what goes on here??
Add the hops extract gradually until the right consistency is achieved.
Icing on the cake greased and finally crushed the detainees hop pellets between two spiseskeeer?? and sprinkled over as garnish. ??


Prefer chilled for several hours until glaze is firm.
Cut into small squares and enjoy with a big glass Dark Hops.
Velbekomme! Your welcome!
Posted by Paul Hayden at 8:58 PM No comments:

Half Doppelbock and half Belgian Style Dubbel brewed with Date Concentrate
"Contract brewed for Schmaltz Brewing Company. Sacred Species No.2 YEAR OF THE DATE "The righteous shall flourish like the Date palm." Psalm 92:12. Hark! The second coming of REJEWVENATOR, infused for 2009 with the sacred DATE. Jewish tradition celebrates two New Years: The first in Spring after the barley harvest. The High Holidays in Fall mark the creation of the world. Harvest to harvest - the perfect bookends for deliciousness! Dates were used to sweeten beer in Ancient Egypt as early as 3500 BCE. Pliny the Elder, 1st c. Roman naturalist, lauded Judea’s Dates for their succulence and sweetness. So important for food and shelter, the Date palm became a symbol for the Kingdom of Judea, stamped on the ancient and modern Israeli Shekel coins. Shaking your Lulav on Sukkot and covering your kosher Sukkah demands Date palm leaves. Palm Sunday reenacts the procession of Jesus into Jerusalem. In Arabic, "Tamr" is the 4th stage of a Date’s ripening. Mohammed: "Whoever eats seven fresh Tamr fruits at breakfast shallrise above magic and poison on that day." The Hebrew word for Date palm is "Tamar", commonly describing the beauty and elegance of a woman. Solomon’s sister was named Tamar. "The only difference between a date and a job interview is that not many job interviews have a chance that you’ll end up naked at the end of it." -Jerry Seinfeld. Like its Latin genus the Pheonix, rise and shine with our newest Double Date Shmoppelbock - and flourish! L’Chaim!" -- brewery

Contract brewed for Schmaltz Brewing Company. Sacred Species No.1 YEAR OF THE FIG Jewish tradition celebrates 2 New years; The 1st calendar month in spring historically came after the barley harvest. The High Holidays in Fall mark the creation of the world. Harvest to harvest - the perfect bookends for deliciousness! Arise noble Rejewvenator, infused for ’08 with the sacred succulent Fig. O the history, O the shtick: Gen 3:7: "And their eyes were opened, and they knew that they were naked; they sewed fig leaves together and made themselves aprons." Time to get cooking! "Professed Wrestlers and Champions were in times past fed with figs." -Pliny, Roman naturalist. Romulus, mythic founder of Rome, and his twin Remus were nursed by a wild she-wolf under a fig tree. In 1857, Queen Victoria commissioned an 18 inch plaster fig leaf to adorn her cast of Michelangelo’s David. "The statue that advertises its modesty with a fig leaf brings its modesty under suspicion." -Mark Twain. Buddha gained enlightenment meditating beneath a fig tree. Zechariah/Micah: "Nations shall beat their swords into plowshares...all will sit with his neighbor under his fig tree, with no one to be afraid." Fear not Shmaltzers - Grab your Newtons, rub your happy belly, strap on your fig leaf and your championship belt, abd prepare to blow your shofar... tis a new HE’BREW Beer season to rejoice. L’Chaim! Brewed for Schmalt Brewing Co." -- brewery

I
Posted by Paul Hayden at 8:50 PM No comments:

Back in stock! Flying off the shelves. Once you taste it, you cannot go back to the others.
Q-Tonic 4pk


A ton of information, but very interesting from their website...
"We are inspired to change your relationship with tonic water. You now have no alternative but to drown your gin, vodka, or rum of choice with a tonic water of compromised quality. Designed from unpronounceable ingredients by multinational corporations, sweetened beyond recognition with high fructose corn syrup, and packaged in generic containers, the typical tonic water is an afterthought that adds nothing to the drinking experience. Q Tonic is dedicated to making the world’s best tonic water - a clean, crisp, completely ungeneric beverage that enhances the finest spirits or stands proudly on its own. We’ve used the best ingredients we could find. We went to the slopes of the Peruvian Andes for hand-picked quinine and to the Mexican countryside for organic agave, a sweetener better than honey with a gently rounded sweetness. We meticulously refined our recipe with both food scientists and mixologists. Then we worked with one of New York City’s best design shops to develop a bottle as beautiful as the liquid it holds. We think we’ve come up with a superior tonic water. One that’s good enough for the gin, vodka, or rum you’d choose to mix it with. And good enough to change the way you think about tonic water."

More facts:
Unlike other tonic waters, Q Tonic is made with:
** Hand-picked quinine from the Peruvian Andes
** Organic agave as the sweetener
** 60% fewer calories than regular tonic water
** All natural ingredients
** No high fructose corn syrup
** 85% lower glycemic rating than other tonic waters
"Q Tonic tastes clean and crisp, as tonic water was intended, with a quick sharpness and a gently rounded sweetness. The bottle is perfectly proportioned for one proper drink.And there’s a reason it’s called tonic. Q Tonic’s natural quinine is believed to improve circulation and accelerate digestion. For centuries natural Peruvian quinine has been used by naturalists and herbalists to improve health, increase energy, and stimulate blood flow."
--- Q - Tonic website
Posted by Paul Hayden at 4:18 PM No comments: 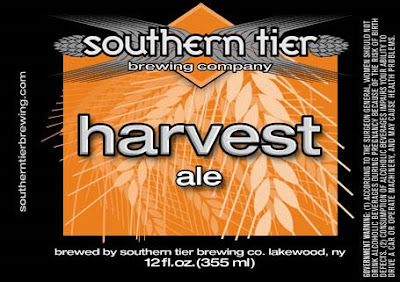 "Harvest Ale is our celebration of the changing weather and the sowing of hops and barley that will be used in our upcoming brews. We usher in the fall with a classic English style Extra Special Bitter of the highest order. Deep ruby in color with an even deeper hop flavor… in fact, we throw fresh English hops into every brewing vessel, then dry hop after fermentation to impart a zesty kick. This beer has real hop character that mingles with fresh malted barley for an experience that will make you wish it were fall year ‘round." -- Brewery 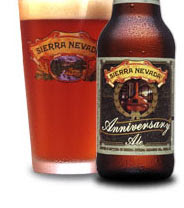 Their website still has the 2008 info:
"Anniversaries are important. They are benchmarks to help us gauge where we stand, and more importantly, they help us to see where we have come from. Each fall, we like to celebrate our anniversary by releasing a very special beer. A beer that represents our past while looking forward to our future. For the past 28 years, we at Sierra Nevada have had a commitment to using the finest raw ingredients, and the freshest, most flavorful hops in all of our award winning ales and lagers. Our Anniversary Ale is no exception.
This beer is a big, full-flavored ale bursting at the seams with fresh, spicy and aromatic hops. Our 2008 Anniversary Ale is brewed in the style of an American IPA, a style that Sierra Nevada helped create. This beer is a complex brew made up with a combination of four varieties of malts that add a rich and complex backbone to showcase our signature hop variety: the Cascade. This hop produces the big piney and citrusy flavors that Sierra Nevada beers are known for and is one of the varieties that have become the definition for what the new styles of American beers represent.
Come help us celebrate 28 years by raising a glass of Anniversary Ale. Take a look back at where we’ve come from, and join us in looking forward to the future." -- Sierra Nevada

Did you know that Provisions BLTA
has TWELVE slices of Bacon!?
(Some even order a double -- 24 slices)

Since the distributor is out of APA (and I have it on sale), I will run the Oktoberfest also on sale this week! Just arrived at Forsyth!
Schlafly Oktoberfest....$5.99 / 6pk
A malty, full-bodied, deep reddish-amber lager. Traditionally brewed in March for the Oktoberfest in the fall, this style is also known as Märzen. -- Schlafly.
Posted by Paul Hayden at 1:12 PM No comments: 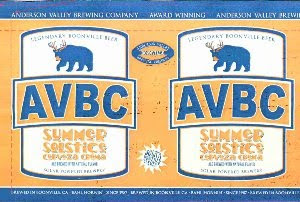 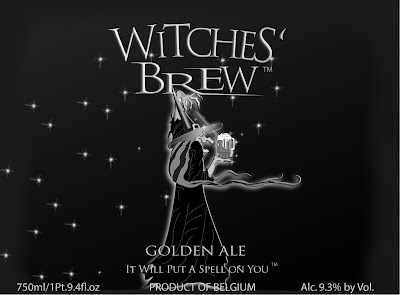 Belgium
"Witches’ Brew is a bottle conditioned blond triple living ale. It is available in only 750 ML bottles with a natural champagne style cork. It has an alcohol content of a whopping 9.3%. So be warned: It will put a spell on you!

After a long day of working at the vineyards, and tasting numerous wines, we found that one inevitably gets palette fatigue. So we thought, "What better way to wind down a long day than to sip a cold brew?" Of course, we wouldn’t settle for just any ordinary beer. No instead we sought out the best brewmeister we could find and issued a challenge: Brew us a beer so great that it will put a spell on you. We didn’t expect him to take that challenge literally, but that is what he did. He went out and bought a few books on witchcraft and went to work.

We would have preferred to let the original brew master say a few words in this space, but unfortunately he was so ecstatic after tasting his life’s piece de résistance, that he mixed up his words and uttered a mistaken spell that cast him . . . we know not where. Which goes to show, be careful if you mix with
witchcraft. Words have meanings. So be warned. Don’t go saying things unless you mean what you say! " -- importer

Posted by Paul Hayden at 2:10 PM No comments: 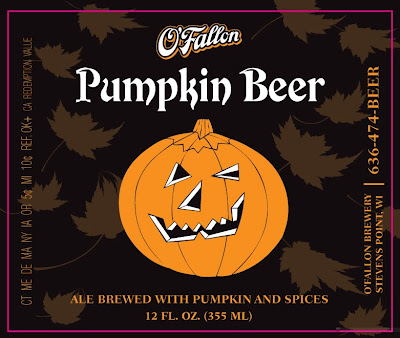 
Like pumpkin pie in a bottle...we add 136 pounds of real pumpkin to the three-barley mash and then season the finished beer with cinnamon, nutmeg and cloves.