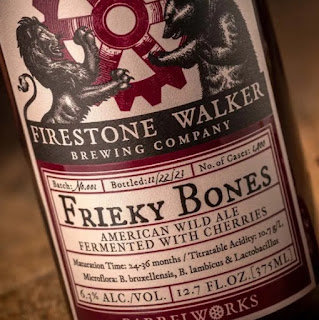 Firestone Walker Frieky Bones...$8.99 / 375ml
It’s time to get your “friek” on as we unveil Frieky Bones, a limited new release from our Barrelworks wild ale cellar.
Frieky Bones is a re-imagination of our long-treasured Krieky Bones, a classic Flanders-style Kriek beer that we hadn’t made for a few years, and that was due for a reprise.
Barrelworks’ Master Blender Jim “Sour Jim” Crooks put is this way, as only he can: “The Krieky skeleton is now raised to the rafters as buckets of electrified cherry rain down, giving new life to a long-buried relative.”
Indeed, Frieky Bones was made with twice the typical amount of Montmorency cherries (totaling 3.5 pounds of fruit for every gallon of beer), creating an incredible wild ale that doubles down on delicious fruit flavors. The Montmorency cherries came from King Orchards in northern Michigan, and they were selected by Jim for their tart yet sumptuous character.
The cherries were co-fermented with a base Flanders-style ale that had spent two years in an oak foeder, and the resulting elixir was matured in oak for another four months prior to bottling.