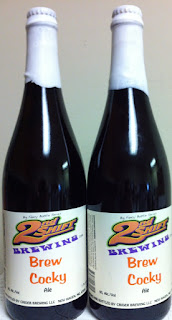 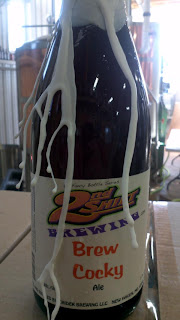 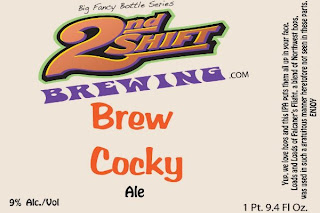 2nd Shift Brewing Brew Cocky Ale....$11.99 / 750ml
"Yup, we love hops and this IPA puts them all up in your face.  Loads and Loads of Falcaner's Flight, a blend of Northwest hops was used in such a gratuitous manner heretofore not seen in these parts.  ENJOY" - label
Posted by Paul Hayden at 3:40 PM 1 comment: 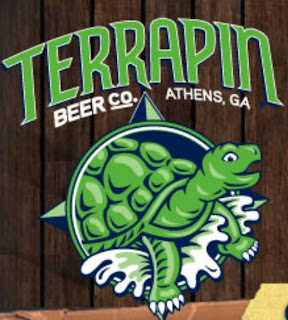 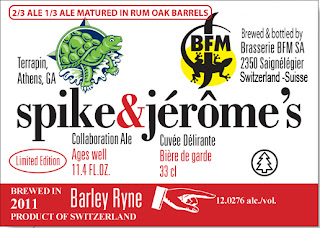 In stock now at Forsyth, very limited!
and online now 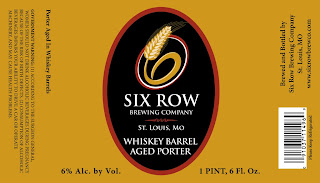 Six Row Whiskey Barrel Aged Porter...$11.99 / 22oz
The Whiskey Barrel Aged Porter marks Six Row Brewing Company’s first special release barrel aged beer. The base beer for is modeled after a traditional session, English-style Robust Porter which was then aged for three months in freshly emptied Tennessee whiskey barrels. During this maturation process, the beer takes on unique flavors and nuances that would not otherwise be available in conventional metal aging vessels. The oak barrels provide much the same flavor components to the beer as they did to the whiskey previously housed in them; predominantly oak with vanilla, roast, and dark fruit flavors.
Posted by Paul Hayden at 12:32 PM No comments: 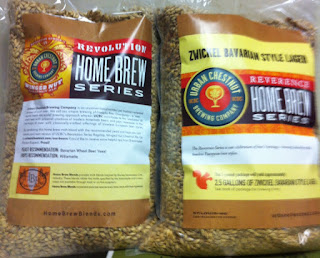 Urban Chestnut Zwickel Bavarian Style Lager...$11.99 / 5 lbs
Urban Chestnut Winged Nut Chestnut Ale / $11.99 / 5lbs
"When Mike Marino led the baking operations at St. Louis Bread Co. during his 16-year run there, freshness was a top priority. That hasn't changed in his latest venture: making custom malt blends for homebrewers that are based on professional breweries' recipes. "Some guys I've brewed with, you go into their basements and you'll see a bag of caramel malt that's been sitting there for a year, and they're still using it," Marino says. "I knew there had to be a better, cost-effective way for homebrewers to get fresh malts that are blended to match professional recipes."
On Thursday, Marino and two partners will launch Home Brew Blends in St. Louis. The company's first two products are malt blends that Urban Chestnut Brewing Co. uses in its flagship beers: Winged Nut chestnut ale and Zwickel German-style lager. Those 5-pound malt packs will retail for about $12.50 and include enough malts for a 2½-gallon batch of homebrew. Customers will have to buy hops, yeast and other ingredients -- like chestnuts if they want to make Winged Nut -- separately.
"This is not designed to be a straight-up clone kit, because that's kind of for beginners," Marino says, referring to recipes that allow homebrewers to replicate or "clone" certain commercially available beers. "I'm trying to attract the interest of intermediate and expert homebrewers, who will be able to use their skills to play around with different hops and yeasts." Urban Chestnut brewmaster Florian Kuplent will provide recipe tips on Home Brew Blends' website for customers to follow. "Lots of homebrewers enjoy cloning beers, but as far as we know, nobody's premixed the malt bill for them," Kuplent says. Home Brew Blends' Winged Nut and Zwickel malt kits will be available starting Thursday at Urban Chestnut (3229 Washington Boulevard). Marino says he hopes to find retail placement in homebrew shops, beer stores, markets and other locations soon. Kuplent and Urban Chestnut co-founder David Wolfe say they were enthusiastic when Marino approached them about this project. They believe the timing is perfect as they prepare to roll out Winged Nut and Zwickel for the first time in bottles. "Who knows, maybe other commercial brewers will pick up on this idea and pre-blend some of their beers for homebrewers as well," Wolfe says. "We think this idea is a natural way for craft brewers to be able to interact with the ever-growing populace of homebrewers."
Info from Evan Benn - Hip Hops
Posted by Paul Hayden at 2:16 PM No comments: