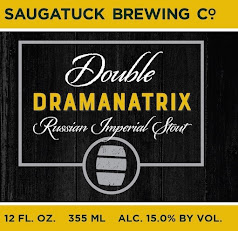 Saugatuck Double Dramanatrix Russian Imperial Stout...$17.99 / 4pk cans
Bourbon Barrel Aged Stout
15% ABV
Cut the drama
Let's get right to the point. This Russian Imperial Stout has been brewed in honor of our 15 year anniversary. What makes this beer so special? It's the Double version of our Dramanatrix ringing in at 15% ABV. To top that off, we made it even more risky by aging it in Bourbon Barrels for 15 months. Tread lightly, there is no safe word.