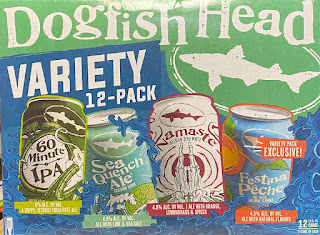 Dogfish Head Variety Pack...$17.99 / 12pk cans
Includes
60 Minute IPA is continuously hopped -- more than 60 hop additions over a 60-minute boil. (Getting a vibe of where the name came from?) 60 Minute is brewed with a slew of great Northwest hops. A powerful but balanced East Coast IPA with a lot of citrusy hop character, it's the session beer for hardcore enthusiasts!

A witbier bursting with good karma. Made with dried organic orange slices, fresh-cut lemongrass and a bit of coriander, this Belgian-style white beer is a great thirst quencher. Namaste White was originally brewed at our pub in Rehoboth Beach with our Italian friend Leo from Birra del Borgo. It was a tribute to our friends at 3 Fonteinen brewery in Belgium, who had devastating production loss (1/3 of their annual production) in 2009. Forget about the car companies, this is the original hybrid. A cross between a Scotch Ale, an India Pale Ale and an American Brown, Indian Brown is well-hopped and malty at the same time (It's magical!).

A refreshing neo-Berliner Weisse, Festina Peche is available in 4-packs and on draft during the sweaty months. Sadly, there are only a few breweries left in Berlin still brewing the Berliner Weisse style, which is characterized by its intense tartness (some say sour). There were once over 70 breweries in Berlin alone making this beer! In addition to fermentation with an ale yeast, Berliner Weisse is traditionally fermented with lactic cultures to produce its acidic (or green apple-like) character. Served as an apertif or summertime quencher, Festina is delicately hopped and has a pale straw color. To soften the intense sourness, Berliner Weisse is traditionally served with a dash of essence of woodruff or raspberry syrup. In Festina Peche, since the natural peach sugars are eaten by the yeast, the fruit complexity is woven into both the aroma and the taste of the beer so there is no need to doctor it with woodruff or raspberry syrup. Just open and enjoy!

SeaQuench Ale is our session sour quencher made with lime peel, black lime and sea salt. It’s a citrusy-tart union of three German styles of beer blissfully brewed into one. We begin by brewing a straightforward Kolsch with lots of wheat and Munich Malt, then we brew a salty Gose with black limes, coriander and our sea salt. We follow it all up with a citrusy-tart Berlinerweiss made with lime juice and lime peel. All three beers are then blended together in the fermentation tank to create this German hybrid.