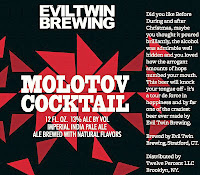 Fresh batch!
Evil Twin Molotov Cocktail Imperial IPA....$3.79 / 12oz can
Evil Twin Molotov Cocktail Imperial IPA....$13.99 / 4pk
Style: Imperial IPA
ABV: 13%
Did you like Before During and after Christmas, maybe you thought it poured brilliantly, the alcohol was admirable well hidden and you loved how the arrogant amounts of hops numbed you. This beer will knock your tongue off, essentially due to the obscure amounts of hops that went down this explosive fella – it’s a tour de force in hoppiness and by far the craziest beer ever made from Evil Twin – but not the last ‘Mwahahahaahhaha’
Rated 97/100 RateBeer
Posted by Paul Hayden at 9:19 PM