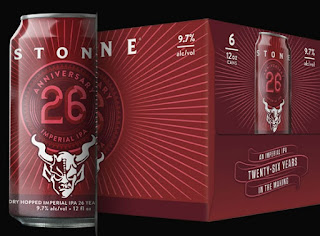 Stone Brewing 26th Anniversary IPA...$16.99 / 6pk cans
Triple Dry Hopped
25 years ago we celebrated the 1st Anniversary of our fledgling brewery with a beer that was far away from the craft beer norms at the time. It was far too intense. It was far too hoppy and bitter. Yet it became the shot heard ‘round the world, and beer history was changed forever. We’re talking of course about our flagship Stone IPA. So, to celebrate the beer that (eventually) launched generations of hop fanatics, we present this imperial version of the beer that made our name among the (budding) craft beer legions. Loaded with gloriously bitter notes of piney, citrusy, resinous dankness, it’s everything we love about our classic West Coast style IPA…properly turned up to 11 25 for the occasion.
Posted by Paul Hayden at 1:01 PM