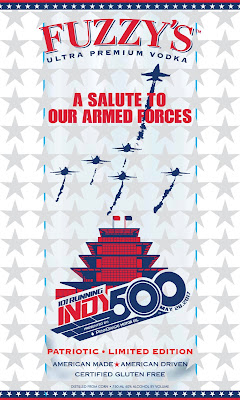 Fuzzy's Vodka Indy 500 Limited Edition....$14.99 / 750ml
Closeout - was $17.99
Fuzzy Zoeller. The name says it all. A legendary golfer, known for his charismatic character, Frank Urban Zoeller, "Fuzzy", is known around the world for his success, as well as his outgoing personality. Fuzzy has won ten times on the PGA Tour, including the 1979 Masters and 1984 U S Open. In addition, he has also won the 1985 and 1986 Skins Game, enhancing the exposure of the competition and increasing the television audience as a result.

In addition to his golf victories, Fuzzy has also received several awards for his sportsmanship and charity. He received the Bobby Jones Award in 1985, joining the ranks of Francis Ouimet, Babe Zaharias, Gary Player, Arnold Palmer, Bing Crosby, Bob Hope and Jack Nicklaus. Fuzzy also received the Dave Marr award in 2010 as a result of his constant commitment to bettering the game of golf.
Posted by Paul Hayden at 12:27 PM