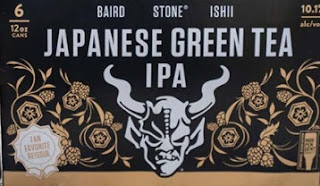 Stone / Baird / Ishiii Japanese Green Tea IPA...$2.99 / 12oz can
Stone / Baird / Ishiii Japanese Green Tea IPA...$15.99 / 6pk
First brewed in 2011, this IPA is something truly magnificent, unique and well worth brewing again. The recipe was a collaboration with our friends Toshi Ishii (who’s first brewing job was at Stone for many years, before going on to become one of Japan’s most celebrated craft brewers), and Brian Baird (who founded Japan’s Baird Brewing). Whole leaf green tea adds a gentle accent to the blend of northern and southern hemisphere hops in this recipe, and our fans have been asking (some demanding) for its bright herbaceousness to make a return for years. To have such an innovative creation be so fervently enjoyed by nearly everyone who tries it – there’s nothing better. When the time inevitably comes to ask us for another release, just say “Mou ippai!” (I’ll have another!)
Posted by Paul Hayden at 9:41 AM