New Vermouth at the Kirkwood Store!

We have been expanding the entire liquor section at Kirkwood, but with warm weather around the corner, we are really ramping up the vermouth section. We may have gone a little overboard this week...😆. We are especially excited about the unique Japanese and Greek vermouth additions! 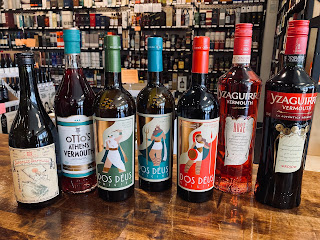 Oka Kura Brand Japanese Bermutto is produced at Tsutsumi Distillery in Kumamoto, Japan. Tsutsumi Distillery has been producing traditional shochu for 141 years and is 1 of only 28 distilleries certified by the WTO as a Kuma Shochu producer, which is similar to the DOC’s of Scotch, Tequila & Cognac. Using 100% rice and only crystal-clear water from the Kuma River, Tsutsumi Distillery is tremendously respected for their ability to bridge the gap between tradition and innovation.
Fortified Junmai Sake with rice shochu. The fortified sake is acidified with Yuzu and Kabosu, and Sansho Peppercorn and Yomogi (Japanese Mugwort) add further complexity and light bitterness. The result is a decidedly Japanese take on vermouth with warming spices and sage on the nose, mellow citrus on the mid-palate, and a grassy finish with lean bitterness and lingering hints of yeast. 18% ABV
Otto's Athens Greek Vermouth...$19.99/750ml

A few steps away from Otto’s house, on the upper floor of a neoclassical building under the buzz of a one of the top 50 bars of the world, a passionate team revived the great times of Athens Vermouth and crafted the first bottle of Otto’s Athens Vermouth. High quality Greek wine infused with rose petals, wormwood, citrus fruit, olive leaves and herbs grown under the sun of Athens such as oregano and angelica, creating a uniquely Greek flavor.