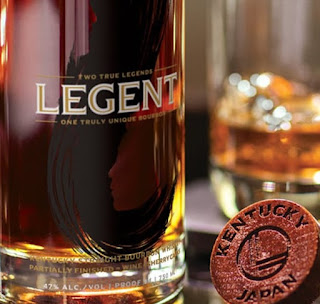 Legent Kentucky Bourbon...$31.99
A Bourbon Unlike Any Other.
Legent is a Kentucky straight bourbon whiskey partially finished in wine and sherry casks. But it's more than that. It pushes the boundaries for how bourbons can be created while remaining true to the core of bourbon's principles. It's a collaboration between two whiskey legends – Fred Noe & Shinji Fukuyo (Suntory chief blender ) – and two unique styles of whiskey making.

Our Story Begins With Kentucky Straight Bourbon.
Legent starts with a historic bourbon recipe from Fred Noe's family. Every drop is crafted with high-quality grains and calcium-rich, iron-free, limestone water and is aged for at least four years in newly charred white oak barrels.

Legent is aged again in sherry and red-wine casks where it picks up several unique flavors. Then Shinji meticulously blends these secondary-finished bourbons with more Kentucky straight bourbon. Blending allows Shinji to balance, add and unlock layers of complex flavors.
This is how Shinji took a historic recipe from Fred's family from barrel to bottle.
From Japan to Scotland to Kentucky, Chief Blender Shinji Fukuyo has traveled the world over learning, studying and perfecting the art of blending whiskey and distilling spirits. For him, Legent presented numerous unique challenges. Bourbon isn't a spirit that's blended routinely. He also wanted to honor Fred's family heritage and produce a unique bourbon of the highest quality. After years of tasting, testing and refining the recipe with Fred, Legent has become another step in Shinji's pursuit of mastery.