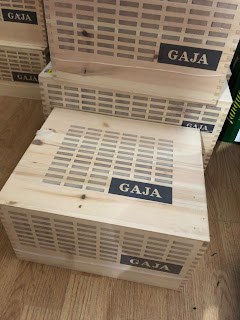 An iconic wine from Barbaresco's best vintage this Century. No vintner or winery is more synonymous with a region than Angelo Gaja is with Barbaresco. His 2016 DOCG Barbaresco (there is nothing "Normale" about it) is an legend in the making.

2016 Gaja Barbaresco....$214.98/btl
I tasted this wine over two sittings, one at the winery and one at my home office a few weeks later. Although I can't claim any extraordinary differences between the two sessions, I noticed a few minimal shifts that are essential to understanding the wine's future aging ability. The 2016 Barbaresco starts off slow at first, showing a small margin of aromatic evolution in the glass. But come back two hours later, and you can almost hear the soft sounds of the symphony playing just below the surface. The 2016 vintage is characterized by the solid intensity and firmness of its aromas, which transcend fruit and veer toward balsamic herb, licorice, tar and smoke instead. The tannins offer a moment of sweetness and softness, before you are aware of their undeniable firmness. In all, there is a certain glossiness or satiny quality to the mouthfeel that underlines the wine's carefully crafted integration. I would describe this as a classic and also a somewhat austere Barbaresco that fully deserves extra cellar time to stretch those tight muscles and grow in volume. This wine will award those who wait.
Rated 96/100 The Wine Spectator
Rated 96/100 The Wine Advocate
Posted by Paul Hayden at 1:25 PM