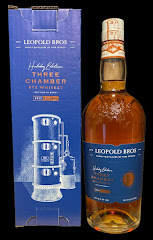 Limited 2022 Holiday Edition
Leopold Brothers Three Chamber Rye 2022 Holiday Release....$199.99
A Revival of a Lost American Tradition
For over a hundred years, American rye whiskey was commonly produced in what was called a Three Chamber Still to extract not only distillate, but also oils and aromas hidden in the grains. The resulting spirit was marketed as “heavy-bodied” whiskey, but production stopped just after World War II and the still in which it was made became a lost American tradition.
Leopold Bros. painstakingly re-engineered a Three Chamber Still from old manuscripts and grew the heritage grain Abruzzi rye that was favored by Pre-Prohibition distillers to resurrect this one-of-a-kind whiskey.
Posted by Paul Hayden at 6:48 AM