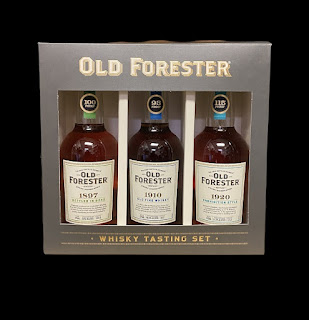 Old Forester Whisky Tasting Set....$99.99 / 3 pack 375ml bottles
Includes one 375ml of each of the bottles below
Old Forester 1897 Bourbon Bottled in Bond...375ml bottle
100 Proof Bottled in Bond
BIG FLAVOR. SMALL BATCH.
This 100 proof expression is the second release in our Old Forester Whiskey Row Series was specially crafted to honor the U.S. Bottled-in-Bond Act of 1897. After the U.S. Bottled-in-Bond Act of 1897 to be labeled as Bottled in Bond, whisky must be the product of one distillation season, one distiller and from one distillery. The concept behind the Act – the idea of “sealed-in quality” – was something that Old Forester – America’s First Bottled Bourbon – introduced in 1870.

Old Forester 1920 Prohibition Style Bourbon...375ml bottle
This 115 proof expression is the third release in our Old Forester Whiskey Row series and celebrates the brand’s continued distillation during Prohibition. For 13 years, the production, transport and sale of alcohol was strictly prohibited. However, Old Forester was granted a permit to continue distilling on Louisville’s Whiskey Row. The 115 proof expression represents a barrel sample that company president Owsley Brown I would have batched at the beginning of Prohibition.