We cannot be more excited to introduce Pont Neuf to St. Louis and Missouri!
These wines are very small production, very high quality and we are one of the very few places you will find them outside of the winery!! 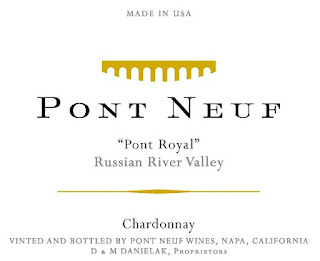 Pont Neuf Wines: The Exception that Proves the Rule
Over the 20+ years I have been buying and selling wine, one, almost universal, truth I have found is that the great wines don’t find you, you have to go seek them out. Well, recently I ran into the exception to prove that rule, Pont Neuf Wines. A few months ago I received a phone call asking if we would be interested in tasting some wines from Pont Neuf Winery, not wanting to be rude I told the gentleman that while I was not tasting (global pandemic and all) but if he would like to drop off bottles we would be happy to try them. After the first sip of the Point Royal Chardonnay, I was sold, hands down the most intriguing bottle and drove back to the shop to grab a bottle of La Source Pinot to try as well, the Pinot was just as impressive. Needless to say we are thrilled to introduce Pont Neuf Wines to St Louis.

Pont Neuf Wines, the brain child of Doug and Mary Danielak, is an effort to translate the bold flavors of California with the transparency and technique of Burgundy, allowing the character of terroir to take the lead in the finished wine. Doug and Mary spent their formative wine years in Burgundy, While studying in France, Douglas worked his first harvest at Chateau de Chambolle-Musigny with his friend and classmate Frederic Mugnier as well as studying and making life-long friends with the sons and daughters of many prized Domaines of the Cote d'Or. While Mary worked with French wine exporter Rebecca Wasserman, the opportunity to combine her love of food & wine, language and photography was the chance of a lifetime. Meeting and working with both French and American wine producers proved to be key in what lay ahead for her career. Today Doug and Mary are making some of the most compelling Pinot Noir and Chardonnay from Sonoma’s Russian River Valley.

2018 Pont Neuf Russian River Chardonnay Pont Royal...$54.99
Only 120  cases produced
Premier Cru Quality
The 2018 Pont Royal reveals a brilliant clarity both in appearance and focused flavors. The vineyard character shows in the forward citrus, fresh peach, custard and honied beeswax which are consistent hallmarks of Pont Royal. The texture is crisp, but with a satisfying fullness and great persistence of flavors. Pont Royal is a chameleon; one moment floral and lilting, bold, rich and deep the next. French oak takes a back seat to the fruit, adding nuanced aromas of toasted brioche and fine structure to the wine. We employed 80% new oak from the Vosges forest, contributing the delicate toast and vanilla aromas and playing perfectly with bright citrus fruit. Barrel-fermented, aged on the lees and bottled un-fined and unfiltered, this natural fermentation showcases the vineyard and the vintage.

2018 Pont Neuf Russian River Chardonnay Pont Marie...$74.99
Only 75  cases produced
Grand Cru Quality
We look forward to making this elegant and perfumed wine each year. Our grapes are meticulously farmed to the highest standards. Cold fog from the Pacific Ocean, only five miles to the west, tempers the warmth of summer, and ripens the grapes slowly and evenly. Powdery white soils provide optimal drainage and allow the grapes their best expression. Harvested at night to preserve freshness and to minimize damage to the fruit, the juice was extracted slowly and allowed to settle and clear prior to fermentation. The chilled juice was moved to all new gradually toasted French barrels for fermentation and then allowed to complete primary and malo-lactic fermentation, slowly and naturally. The following spring the wines were stirred gently on the lees. The wine remained quiet, developing for twelve months until it was bottled un-fined and unfiltered. In 2018 Mary selected three superb barrels for our “Pont Marie” Chardonnay. Elegant and textural, the wine is lively and supple with aromas of mineral, brioche, and white peach supported by a vibrant acidity, concentrated flavors and rich textures on the palate. We feel that this single-vineyard lot, comprised uniquely of Montrachet clone, is the ultimate in opulence. Best now-2035. 75 cases produced.

Extra info about the owners

For the past twenty years, winemaker Douglas Danielak has made wine for some of the Napa Valley's most respected wineries. Influenced by all things French, Douglas started his winemaking career completing the Professional Winemaking Program at the Lycée Agricole et Viticole de Beaune in Burgundy. At that time he worked with Wine Exporter Rebecca Wasserman at Le Serbet where he gained in-depth knowledge of Burgundian wines and barrels while escorting top winemakers to Francois Fréres and Taransaud cooperages. While studying in France, Douglas worked his first harvest at Chateau de Chambolle-Musigny with his friend and classmate Frederic Mugnier as well as studying and making life-long friends with the sons and daughters of many prized domaines of the Cote d'Or.

In addition to his studies in Burgundy and tasting with his peers in California, Douglas completed his degree in Viticulture and Enology at U.C. Davis and began a successful wine consulting business in Napa Valley. As one of the first Rhone Rangers, Douglas founded the Jade Mountain label with Jim Paras and was recognized as one of the top innovators of Rhone wine in America. Since then he has expanded his repertoire, crafting fine Bordeaux based wines, Rhones, and naturally Chardonnay and Pinot Noir for his list of clients. With a background and philosophy common to small vintners on either side of the Atlantic, all the wines are made to speak clearly of their origin. With a new set of compelling wines, Douglas and Mary bring the same complexity, charm, and sensibility that was forged by their experience in Burgundy to the wines of Pont Neuf.

Mary Danielak
While Mary worked with French wine exporter Rebecca Wasserman, the opportunity to combine her love of food & wine, language and photography was the chance of a lifetime. Meeting and working with both French and American wine producers proved to be key in what lay ahead for her career.

Upon returning to the United States the couple moved to Napa Valley and she became wine buyer for Oakville Grocery Company as the business began an expansion to five retail stores and the Oakville Café. Over the 18 years in Oakville she honed her marketing skills and developed the reputation as one of the most respected palates in the industry. The relationships formed with Californian winemakers visiting Burgundy had informed and shaped her talents as a buyer and they continued to flourish. When she was not at the store, she was pitching in at harvest and assisting Douglas with his winemaking projects. With a firm grounding on two continents Mary developed a concise understanding of wine from both the New and Old Worlds. Douglas and Mary now enjoy utilizing their talents in guiding their own label, Pont Neuf.
Posted by Paul Hayden at 5:34 PM