Against the Grain fresh releases 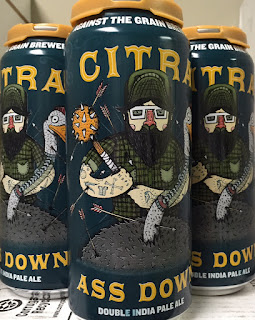 Against the Grain Citra Ass Down...$13.99 / 4pk 16oz Cans
Citra ass down and crush this beer!
This is a very hop forward American style IPA. Brewed with Pale, Vienna, Munich and wheat malt for a solid base for all American hops, focusing mainly on the variety “Citra.” Citra hops are a relatively new variety introduced in 2008. It was bred as a hybrid of a number of different hops, including Hallertauer Mittelfrüh, U.S. Tettnanger, East Kent Golding, Bavarian, Brewers Gold, and other unknown hops. The resulting hop, Citra, has a distinct citrusy and tropical fruit flavor and aroma. In Citra ass down we used American Columbus for bittering and 11# of Citra at the end of the boil for late kettle addition flavor and aroma. Then we added 6 more pounds Citra and 5# Centennial post fermention for aroma. Rebrewed for your tasting pleasure!

Against the Grain Rico Sauvin....$15.99 / 4pk 16oz Cans
Ahh Dey Ahh Dey, RRRRico Ahh Dey Ahh Dey Saaaauvin!
An India Pale Ale featuring Nelson Sauvin hops. Named after the Sauvignon Blanc grape, is a variety of hop developed and grown in New Zealand. It has a strong fruity flavor and aroma that is described as resembling white wine, or fresh crushed grapes or gooseberries. Some reviewers of this hop perceive the fruitiness as being very tropical with descriptions including passion fruit, tangerines, and grapefruit. These hops are organic and are about 4 times as expensive as our normal American varieties, hence the footed glass only.
Posted by Paul Hayden at 1:16 PM