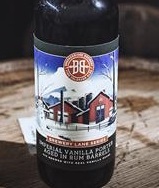 Breckenridge Imperial Vanilla Porter in Rum Barrels...$11.99 / 750ml
Breckenridge Brewery's special series of bold and adventurous recipes brings something new in 750 ml cork and cage bottles just three to four times a year. The releases coming out of its Brewery Lane Series are recognized for their innovation and intrigue. This month the brewery unveiled Imperial Vanilla Porter Aged in Rum Barrels. A stronger rendition of the brewery’s renowned Vanilla Porter recipe, it is powerfully robust in flavor and strength. Relaxing in rum barrels for 55 days, the beer soaks in both the subtle sweetness of rum and savory vanilla flavors from fresh bundles of Madagascar vanilla beans.
“This release takes Vanilla Porter to a new level,” shared Todd Usry, President and Brewmaster of Breckenridge Brewery. “It’s elevated not just in terms of higher ABV and flavor, but in overall complexity. This one’s well-suited to the series…an example of how we continue to push the envelope on existing beers and come out with new surprises.”