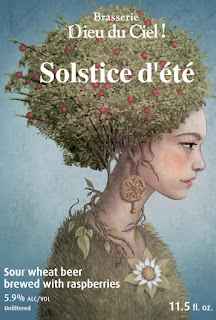 More just arrived today
Dieu du Ciel! Solstice d'ete...$4.49 /11.2oz
"German inspired sour wheat beer. The Obvious and domineering acidity of this beer is therefor obtained by letting the unboiled wort go sour for several days. The Summer Solstice (Summer Solstice) is made by the full addition, During the fermentation process, of a phenomenal quantity of whole fruit (raspberries in this case). The result is a very refreshing beer and fruity acidity Where Both flavors dominate wholeheartedly.

Summer Solstice is brewed only once a year " 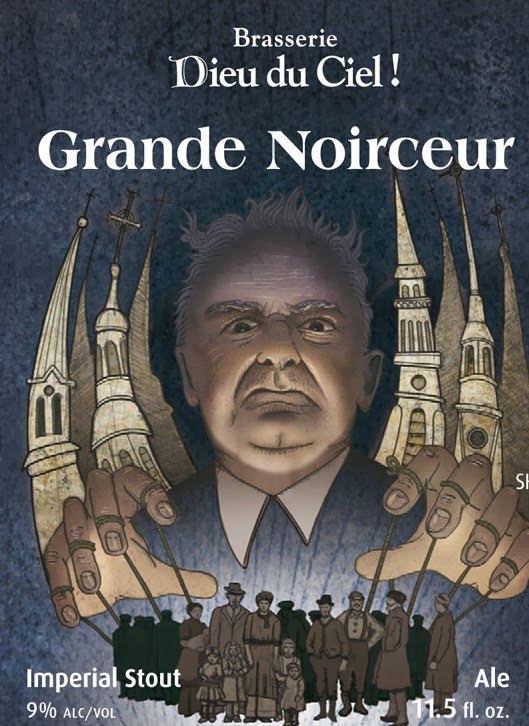 
9% ABV
"The Great Darkness"
The Grande Noirceur (Great Darkness) is an intense and dense black beer with strong roasted flavours. Its imposing bitterness is balanced by the presence of malted, caramel notes. The high alcohol content is well integrated and discreet, well suited to this beer’s complex nature.

This stout style, high in alcohol and bitterness in order to favour preservation, was originally brewed to support the long and arduous voyage necessary to export the beer from England to Russia. The word Imperial comes from the fact that the beer was specially brewed for the Russian tsar’s court.
The name of this beer refers to the Prime minister Duplessis political era (1945-1960) when the Quebec government was under the strong influence of the church and willingly kept the inhabitants into ignorance and away from progress.
Posted by Paul Hayden at 3:31 PM