Tom’s Town Distilling Co. is downtown Kansas City’s first legal distillery since Prohibition. Drawing inspiration from the country’s most polarizing and corrupt political boss, Tom Pendergast, Tom’s Town brings to life the glamorous magnetism of the Gatsby-era. Rooted in a deco optimism, Kansas City flouted Prohibition under the Pendergast machine. “King Tom’s” irreverence for federal statutes in favor of bare-knuckled local capitalism allowed his town to emerge as the “Paris of the Plains.” Spirits, money, and jazz flowed like water in the city’s world-renowned fountains.
Legend has it that when a newspaperman asked Pendergast how he justified ignoring the federal statutes behind Prohibition, he shrugged and said, “The people are thirsty.” 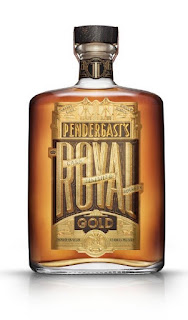 Tom's Town Pendergast's Royal Gold Bourbon...$44.99
90 PROOF 45% ALC./VOL.
Until he could fire up his own still, the country’s most corrupt political boss, “King Tom” Pendergast, procured the finest bourbon from Kentucky and Tennessee. He bottled it, trademarked the brand name, and sold Royal Gold to a thirsty public. In the same spirit and with the same name, we present Pendergast’s Royal Gold Bourbon. We didn’t have to bribe anyone to make it taste this good.

With aromas of caramelized sugar, pleasant oak, and stone fruits, this bourbon offers a rich warmth that’s perfect for treating special guests. To achieve a smooth and well-balanced flavor, we finished this batch of Pendergast’s Royal Gold in hand-selected 14-year-old port casks. Raise a toast to the latest release in our line of curated whiskeys: Pendergast's Royal Gold - Cask Finished. 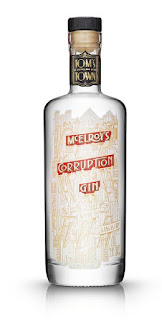 Tom's Town McElroy's Corruption Gin....$32.99
90 PROOF 45% ALC./VOL.
Prohibition-era Kansas City roared with gambling, jazz, and speakeasies. It was a wide-open town, and no one fought harder to keep it that way than City Manager Henry McElroy. Turning patronage and graft into an artform, McElroy funnelled sketchy contracts and vice industry cash to the country’s most corrupt political boss, Tom Pendergast. In McElroy’s’s spirit we present an elaborate and cunning gin, a corruption of unexpected flavors and uncommon botanicals.
McElroy’s Corruption Gin is a complex, spicy and botanical New Western style gin. 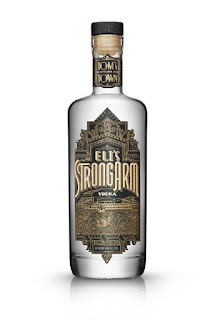 Tom's Town Eli's Strongarm Vodka...$23.99
80 PROOF 40% ALC./VOL.
When you needed a favor in Prohibition-era Kansas City, you went to Tom Pendergast, the country’s most corrupt political boss. Between you and Boss Tom stood Eli Matheus, a rough-hewn riverboat captain who was as likely to put his arm around you as punch you in the throat. In his spirit we present an imposing vodka for unpredictable characters.