Very little is made.  We got our one barrel - only 216 bottles made in The Wine and Cheese Place Barrel No. 21 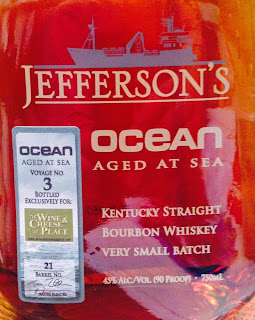 Jefferson's Ocean TWCP Voyage No.3....$69.99
Only 216 bottles produced
Barrel No. 21 produced exclusively for The Wine and Cheese Place

What began as a fun experiment has resulted in a more scientific approach to the maturation process of bourbon.  When whiskey was first distilled in Kentucky, it received intentional extra age from travelling on rivers and seas en route to market.  This was not just due to lengthy trips but also the movement of the ship which forced the liquid  in whiskey barrels to be in constant motion coming in contact wit the wood more often.  At Jefferson's we wanted to tip our hat to this tradition by aging bourbon at sea.  We put fully matured Kentucky Bourbon on a ship and set it on its way to crossing the equator 4 times, stopping at 5 continents and over 30 different ports.  This process has added a salty, caramel elements that round out the bourbon's profile to create an American treasure that has been cultured as traveled by the globe.

Take a look at the ports that our barrel stopped and visited....