The Bruery is Back!

The Bruery is returning to The Wine and Cheese Place 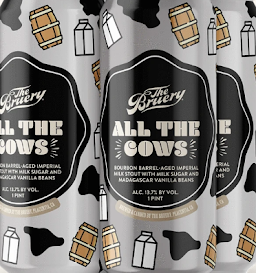 The Bruery All The Cows Bourbon Barrel Aged Imperial Milk Stout...$9.99 / 16oz can
Bourbon barrel-aged imperial milk stout with milk sugar and Madagascar vanilla beans
Tip your tastebuds with this bourbon barrel-aged milk stout. So rich and creamy, we had to use all the cows. We started with a big, rich imperial stout and aged it in bourbon barrels with Madagascar vanilla beans until it was udderly delicious.
Tasting Notes:  All The Cows pours a thick jet black with aromas of rich dark berries and cherry with a hint of bourbon and vanilla. Vanilla also shines through in the palate; a creamy mouthfeel carries rich berry notes, followed by a semi-sweet finish interlaced with bourbon notes from the barrel. 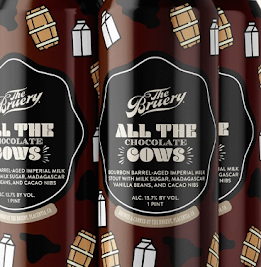 The Bruery All The Chocolate Cows Barrel Aged Chocolate Milk Stout...$9.99 / 16oz can
Bourbon barrel-aged imperial milk stout with milk sugar, Madagascar vanilla beans, and cacao nibs
Tip your tastebuds with this bourbon barrel-aged milk stout. So rich and creamy, we had to use all the chocolate cows. We started with a big, rich imperial stout and aged it in bourbon barrels with Madagascar vanilla beans and cacao nibs until it was udderly delicious.
Tasting Notes: Pouring a viscous jet black, All The Chocolate Cows has overwhelmingly chocolatey aromas, specifically dark, bitter, semi-sweet baker’s chocolate. The palate follows suit with a creamy mouthfeel and notes of dark chocolate, hints of spice and rich berry from the vanilla, and bourbon from the barrel. 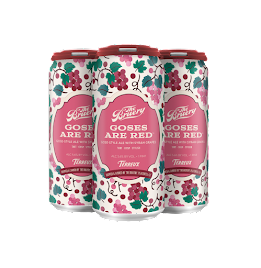 The Bruery Goses Are Red...$12.99 / 4pk 16oz cans
This is a rosé - and a gose - by any other name. Goses are Red is a stylish funky, crisp and tart gose ale inspired by the soft sweetness of a rosé wine. The refreshing wheat-based ale begins with some of the qualities you’d expect from a gose, including coriander spicing and a light saltiness to complement the tartness imparted by our house cultures. But the story doesn’t end there - it builds in complexity, thanks to time spent in an oak foeder and the addition of grapes, which impart a refreshing character and color. 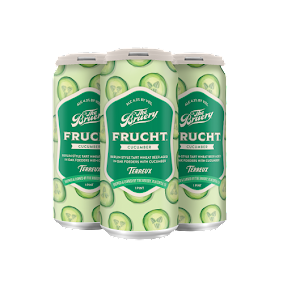 The Bruery Terreux Frucht Cucumber...$14.99 / 4pk 16oz cans
Frucht gets its complexity from a blend of Brettanomyces and Lactobacillus. Known for a tart flavor profile and traditionally low ABV, this German-style wheat beer gains even more funky notes and natural earthy-woodiness from fermentation in oak foeders. Each installment in the series features a new fruit, or Frucht, if we’re sprechen sie Deutsch. This installment features cucumber (yep, it’s a fruit), which lends a cool, refreshing balance to the tartness of this palate-cleansing beer. Prost!
Some of there Offshoot IPAs where available but we decided to wait for a fresh batch of them as they were 3+ months old.  Watch for those in the future.