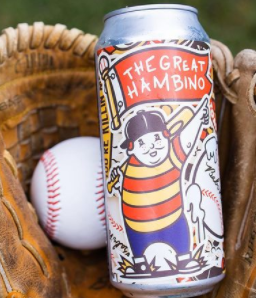 Main & Mill The Great Hambino Stout...$6.99 / 16oz can
11% ABV
S’mores inspired Imperial Stout with marshmallow, cacao nibs, cinnamon, and vanilla
Our first imperial stout can and one that is extremely well represented by the Hambino…the original S’mores connoisseur. With our Oated Imperial Stout recipe as our base, layered with extra honey malt before aging on an Ghanian cacao nibs, vanilla, and marshmallow. Finished with a touch of Ceylon cinnamon sticks. A balanced stout with some sweetness but not overwhelming.