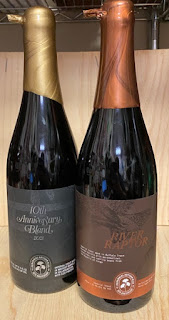 We traded Perennial 5 barrels for a couple of bottles of beer!


Perennial River Raptor - Imperial Stout aged in Buffalo Trace Barrels with Marshmallows, cacao nibs and vanilla beans (not for sale, only available at the brewery)

Perennial 10th Anniversary Blend - Bourbon Barrel Aged Stout in collaboration with Side Project (not for sale, only available at the brewery)

We sent them five barrels that we will see some beer in a few years.