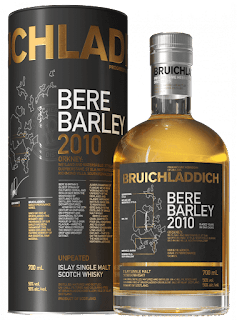 Bere Barley is a six-row heritage variety that has long since been forgotten from the modern world of standardised whisky making. Its revival into present day has taken effort and resilience from an entire network of millers, growers and agronomists. Our Bere project is dedicated to those like-minded souls, who have preserved a legacy and found modern applications in flavourful food and drinks, whatever the odds. This Bruichladdich Bere Barley was distilled in 2010 from a 2009 harvest, brought home by Peter, John, Magnus, Sydney and Duncan on the Orkney Islands.
Posted by Paul Hayden at 9:51 PM