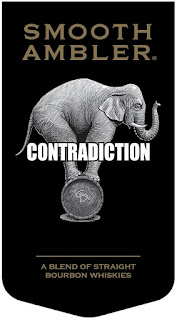 Smooth Ambler Contradiction...$37.99
Blend of Straight Bourbon Whiskies
92 Proof
At Smooth Ambler, after we began merchant bottling the whiskey we call Old Scout, it occurred to us that at some point it may be fun and interesting to blend a little of the delicious bourbon we source with the smooth and sweet wheated bourbon we distill here in West Virginia. With that notion in mind, Contradiction was born; a blend of whiskey we make with whiskey we do not. Contradiction is non-chill filtered and is full-bodied, with notes of dried fruit and butter rum, and has the end-result of tasting like a four-grain bourbon.
Mashbill: Merchant bottled bourbon made with corn, rye and malted barley married with homemade bourbon made with corn, wheat and malted barley.
Distillation Process: Continuous column distillation and pot distillation.
Aging: A blend of different straight whiskeys, there are different ages represented in Contradiction. The majority whiskey is more than 9 years in age.
Posted by Paul Hayden at 3:22 PM