Southern Tier Cinnamon Roll Imperial Ale...$6.49 / pint
The scent of our brewery on brew days is irresistible. Akin to the morning’s first brewed batch of perfectly roasted coffee, the aromas envelope you and cause the corners of your lips to curl into the slightest unconscious smile. In this brew, lightly toasted malts with subtly spicy hops blend into cinnamon flavors and creamy lactose sugar. Their coalescence is so uncannily close to fresh baked cinnamon rolls that it was impossible to name this beer anything other than Cinnamon Roll Imperial Ale! Pairs perfectly with eggs benedict at brunch, after dinner, or next to the fire for an unforgettable nightcap. 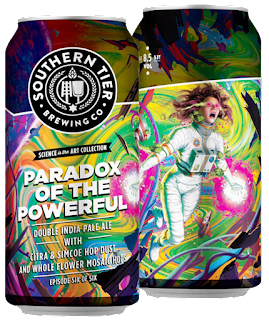 Southern Tier Paradox of the Powerful...$12.99 / 4pk 16oz cans
The swan song of our Science is the Art Collection, Paradox of the Powerful, is hopped six ways from Sunday. We hit it with a dose of Mosaic hops in the kettle on its way to the whirlpool, then we open the floodgates and soak whole flower Mosaic in the hopsack at over 1/2 A pound per barrel. We lace the fermenters with Citra and Simcoe hop duSt over the course of several days to produce juicy tropical flavors and aromas. Notes of grapefruit and berries coupled with low IBU make this a crusher, much like our space heroine.