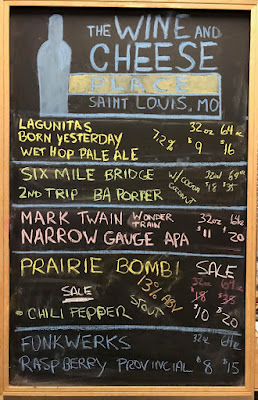 Narrow Gauge Collab
Mark Twain / Narrow Gauge Wonder Train APA
Mark Twain Brewing Co is thrilled to release their first official collaboration brew, Wonder Train American Pale Ale....Jeff Hardesty, head brewer at Narrow Gauge Brewing in St. Louis, co-designed the recipe and traveled to Hannibal early last month to brew it with us. For those of you unfamiliar with Narrow Gauge, the brewery has gained quick Nation-wide notoriety for their IPA's and Pale Ales. Wonder Train is the perfect blend of Jeff's style and ours.

Only available in draft in St. Louis right now...
Funkwerks Raspberry Provincial
Sour Ale Brewed with Raspberries
ABV: 4.2 %
This delicious creation was truly a product of creativity, ingenuity, and luck. In the summer of 2013 we took a test batch of our sessionable sour summer ale, Provincial, that didn’t quite hit gravity and decided to have some fun with it by adding a heavy dose of raspberries. The end result was so delicious, we ended up brewing it year-round. This delightfully tart fruit beer is refreshing, with a citrusy berry aroma which transitions to a subtly sweet and tart finish.
Notes of lemon zest and tart raspberries.

Prairie Bomb! Deconstructed is on sale - priced to more
Posted by Paul Hayden at 5:54 PM