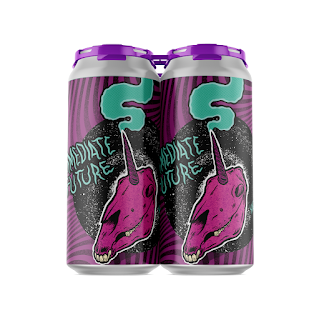 Pipeworks Brewing Immediate Future Hazy Pale Ale...$12.99 / 4pk 16oz cans
Immediate Future | Hazy Pale Ale with cryo Mosaic hops | 6% abv |
The immediate future is most definitely hazy...
What we do know is that there will be a textured and juicy pale ale bringing massive Mosaic hop aromas of blueberries, blackberries, pineapple and grape
Plus back in stock
Pipeworks Ninja vs. Unicorn vs. The Haze...$14.99 / 4pk 16oz cans
Double IPA ~ like Ninja vs Unicorn but hazier juicer
8% ABV
Unicorn but more juicy hazy!
We took our Ninja vs Unicorn double IPA and brewed this beer with a yeast that creates a fuller mouthfeel. The tropical, mandarine orange, pineapple notes from the hops are really emphasized. This is a special beer that we're currently making only occasionally.


Pipeworks Infinite Citra Hopped IPA...$10.99 / 16oz cans 4pk
Infinite Citra | Citra Hopped IPA | 7% abv |
This beer is all about the king of citrusy hops - Citra. Infinite amounts and infinite aromas of Citra hops. A crack of this can and you're pretty much transported to an orange grove. Lots of marmalade, mandarine orange snack cups, fresh squeeze orange juice flavors happening - and it's all the hop.


Pipeworks Lizard King...$9.99 / 4pk 16oz cans
The Lizard King isn't one to sit out an epic battle! Lizard King Mosaic Hopped Pale Ale is a Pipeworks classic. This beer is crisp, easy, and full of vibrant berry, pomegranate, pineapple, and woodsy aromas. The goal when brewing this beer was to create a beer that's chill enough to be a go-to but still something worth the crown - enter: The Lizard King!

Pipeworks Premium Pilsner...$9.99 / 4pk 16oz cans
A Premium Pilsner | ABV 4.9% |
This, my friends, is the beer you can drink.
It's reliable, consistently delicious, and well-made. It doesn't need to pull focus to stand out. It's as much about what it isn't as what it is. The only ingredients are curated malts, traditional hops, good old Lake Michigan water, and time. So much time. We allow this beer to tell us when it's ready to be packaged, and sometimes it needs another minute, but that's ok.
Posted by Paul Hayden at 8:21 PM