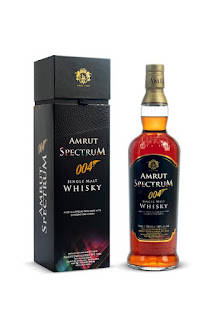 Amrut Spectrum 004 Indian Single Malt Whiskey...$159.99
New Release of Award Winning Amrut Spectrum
Amrut presents to you an intricate single malt that boasts a mosaic of tastes and flavors lent by a variety of Oak. Initially matured in Ex-bourbon barrel, the single malt is transferred to a custom-built, unique barrel that is constructed out of not one but four varieties of oak - American Oak with level three charring, French Oak with slight toasting, Ex-Oloroso Sherry Stave and Ex-Px Sherry Stave. The result is a complex single malt that will both engross and delight you in equal measure.