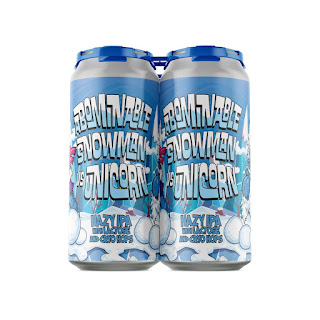 Lofty cryo hop aromas of candied orange, winter pine, and fresh honeydew melon burst out from these soft and hazy suds that are smoothed out with a touch of lactose.
Pipeworks Ninja vs. Unicorn Double IPA...$11.99 / 4pk
Double IPA | 8% ABV | 4 pack of 16oz cans
Ninja vs Unicorn is the classic and essential Pipeworks Brewing beer. We take as much pride and care in brewing this beer in 2021 as we did when we first brewed it in a garage in 2011. Ninja vs Unicorn is an epic battle between both juicy and piney hops - an aromatic clash that brings massive flavors in an incredibly drinkable Double IPA.

Pipeworks Ninja vs. Unicorn Double IPA...$10.99 / 4pk
Mini Unicorns | IPA with Citra, Simcoe, Amarillo, and Mosaic hops
If you had a trapper keeper in the year 2000, you may know the vibes!
Mini Unicorn is a smaller, more mini, version of Ninja vs Unicorn! Instead of a Double IPA, this is a straight up 5% IPA absolutely bursting with hop aroma. This might just be a new favorite - and would you expect any less from mini unicorns?!