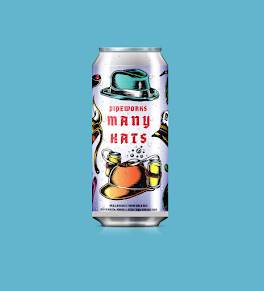 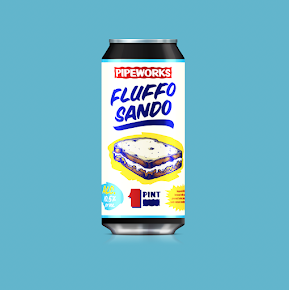 Pipeworks Many Hats Many Hats Hazy Double IPA...$13.99 / 4pk 16oz cans
Hazy Double IPA with Azacca, Idaho 7, and Cryo Simcoe hops | 8% ABV |
Many Hats - we all wear 'em! This beer does double duty and is both juicy and piney, full of tropical aromas of pineapple, guava, and kiwi and fresh citrus notes. This hazy is smooth with a gentle finish

Maybe you remember opening your own lunch box and discovering a fluffernutter sando waiting for you. This beer is inspired by the lunch box gem you'd never trade away - not for any amount of fruit roll ups, and certainly not for that lame turkey sandwich...
Just like the peanut butter fluff sando, this beer is basically dessert. It's fudgy, rich, and decadent.
**Brewed with real peanut butter.**
Pipeworks Brewing Mini Unicorn IPA....$10.99 / 4pk 16oz can
Mini Unicorns | IPA with Citra, Simcoe, Amarillo, and Mosaic hops
5% ABV
If you had a trapper keeper in the year 2000, you may know the vibes!
Mini Unicorn is a smaller, more mini, version of Ninja vs Unicorn! Instead of a Double IPA, this is a straight up 5% IPA absolutely bursting with hop aroma. This might just be a new favorite - and would you expect any less from mini unicorns?!
Posted by Paul Hayden at 8:57 PM