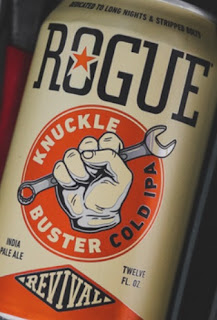 Rogue Knuckle Buster Cold IPA...$11.99 / 6pk 12oz cans
At Rogue, we are always working on new ideas that break from the norm; this collaboration is no different. Our friends at Revival Cycles in Austin, Texas also like to push the envelope with their hand-built motorcycles, so teaming up on a new style of IPA that uses a cold fermentation technique just made sense. Knuckle Buster Cold IPA turns out fairly light in body with a floral hop aroma and flavor. It drinks crisp and refreshing, perfect for winding down after busting your knuckles in the garage all day. 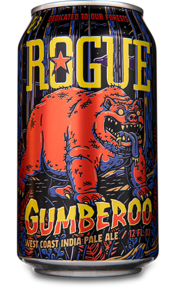 Rogue Ales Gumberoo West Coast IPA...$11.99 / 6pk 12oz cans
Ever hear the story of the Gumberoo? As the story goes, three loggers were camped in the woods drinking beers and entertaining the idea of illegally harvesting old growth sequoias for extra cash when the ground suddenly shook with a heavy footstep. Bigger than a bear with wild eyes and jagged teeth, the Gumberoo rose from behind a stump with a mighty roar. As the loggers scrambled to escape, beer spilled onto the fire causing smoke to fill the air. Some say the forest only wanted to send them a warning that night as this stroke of smokey fortune helped hold off the Gumberoo while the loggers got away. So remember to respect our forests, put out your fires and always bring cold beer camping.
Posted by Paul Hayden at 9:15 PM