Get Radical Train to Mars

Get radical is a brewing project revolving around the concept of experimentation and collaboration. Founded in 2013, get radical is based in Paris, France and is the project of Brandon Evans & Simon Thillou of the world famous la cave a bulles. We are brewing artisinal, experimental beers inspired by music. With our eclectic tastes, we set out to produce hand crafted beers that don't find themselves fitting into a particular style, just as most of our favorite musicians don't fit into a particular genre. Collaborating with our friends (who have breweries) our goals for get radical are to encourage new ideas to the brewing culture of France while bringing our community closer together. Sante ! 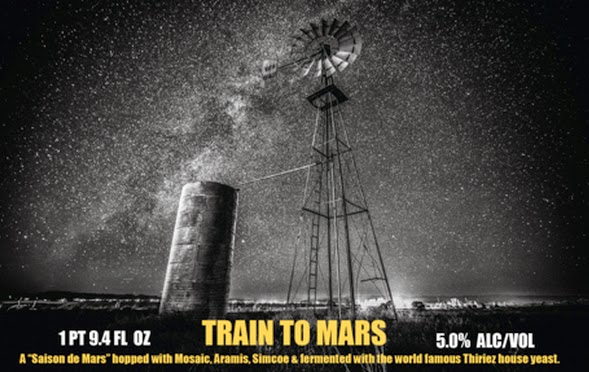 
INSPIRATION:
Inspired by so many things it's hard to believe. While tasting the colab that Brasserie Thiriez and Saint Somewhere brewed & listening to the song "Stars" by Hum on repeat, the idea of Train to Mars finally transpired. A modern, hoppy version of a "Biere de Mars"
CONCEPT:
While at Chez Thiriez, we scoped out his hop selection and realized we could actually brew with both American & French hops and have the names spell out MARS; Mosaic, ARamis, and Simcoe. Well, they ended up being a perfect blend that provide the delicate yet exotic aromatic quality of Train to Mars, but used with enough restraint to accompany the Thiriez house yeast strain. Train to Mars isn't exactly "Radical" but it is our favorite brew so far and interestingly enough a third of the batch is aging in Cote du Rhone barrels accompanied by locally sourced honey and Brettanomyces; sounds a bit more like Get Radical, doesn't it?
REALIZATION:
By far our most collaborative effort yet. Brewed with our friends at Brasserie Thiriez in Esquelbecq, France in January 2014.
Photo courtesy of our friend Sean Parker, and imported by our buddies at Shelton Brothers.