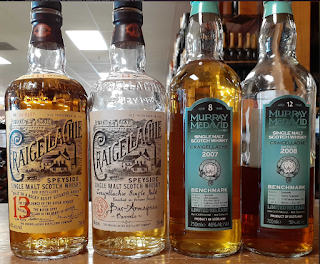 Sweet, funky, meaty and savory are some of the words i would describe the Craigellachie. They rank in my top 10 distilleries in Scotland, just for the description above. They are very complex and layered expressions and well worth the price of admission.

Craigellachie Speyside 13 Year Single Malt Scotch Armagnac Cask Finish....$56.99
Finished in Bas-Armagnac Barrels
This Craigellachie 13 is the first in the Craigellachie Cask Finish series and has been matured for a minimum of 13 years, first in American Oak casks and finished in Armagnac casks from the Bas region.
Craigellachie Speyside Single Malt Scotch 13 Year Old....$59.99
Aged in 1st and 2nd fill Ex Bourbon barrels
"Craigellachie means It means 'ROCKY HILL'. Because it's a hill and it's rocky.
Even when styles changed and the other distilleries moved on, he dug his heels into the craggy Craigellachie rock. Steadfastly using worm tubs to add sulphurous ballast to the dram - they called him 'old fashioned' even in 1891. Ol' Mackie and his cat may have passed, but the Craigellachie method isn't going anywhere.
"Murray McDavid Craigellachie Speyside 12 Year Old Single Malt Scotch...$99.99
Limited Release - 1054 bottles
Bottled from three casks.
Wood: Sherry hogshead
Finish: 1st fill Murça Tawny Port
"The Craigellachie Distillery in the very heart of Speyside is an impressive sight, with its traditional pagoda and glass-walled stillhouse. It proudly displays four large, mighty copper stills, unmissable from the outside, giving you an idea of the visceral power that makes Scotch whisky.
We have taken three casks of powerful 11-year-old Craigellachie single malt and further matured the spirit in specially selected Tawny Port barrels from Caves de Murça, our winemaking partners in Portugal. After 15 months, the time had come to share this transformed Speysider. This bottling is a great representation of what we do at Murray McDavid and our Art of Maturation philosophy.
"Murray McDavid Craigellachie Speyside 8 Year Old..$59.99
Distilled 2007
712 bottles
Bourbon Barrel"The Craigellachie Distillery is an unmissable sight, with its traditional pagoda and glass-walled stillhouse in the heart of Speyside. Proudly displayed are their handsome copper stills, easily seen from the outside, giving you an idea of the power that makes Scotch whisky.The unusually heavy Speyside spirit has been taken through an unusual and complicated maturation by the Murray McDavid Whisky Creations Team. Starting life in a refill American oak barrel, this rich Speyside single malt was split into three unique and unusually sized casks. 30-gallon casks from the Koval Distillery were seasoned with rich, flavoursome rum. Some of the Craigellachie spirit was then filled into these casks to further mature. One of Murray McDavid's uniquely coopered 'Coleburn Drums' (casks which resemble a bass drum) was also seasoned with 160 litres of rum before being filled with the remaining whisky. After a brief maturation in these unique casks, the spirit, which had developed a sweet, honied aroma, was married and bottled."
Posted by Viktoria at 4:15 PM