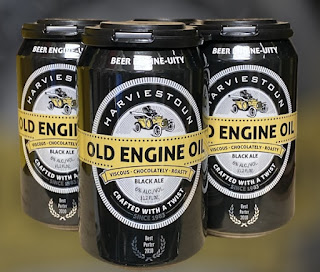 Harviestoun Old Engine Oil Black Ale....$4.29 / 12oz can
Harviestoun Old Engine Oil Black Ale....$14.99 / 4pk 12oz cans
Old Engine Oil is the second Harviestoun beer to win the competition of the British Nationwide Supermarket chain TESCO.  Ken Brooker formerly with Ford in Dagenham established Harvieston Brewery in 1985 in a 200 year old stone byre near Dollar, Clackmannanshire, Scotland. The brewery uses untreated natural spring water from the local Ochill Hills.
Old Engine Oil is a near-black brew with a silky-smooth rummy aroma, a coffee-ish palate, and a suggestion of the darkest chocolate. It is made from pale malt, roasted barley and malted oats. Old Engine Oil is well-hopped with the sweetish variety Galena from Washington State, Worchester Fuggles and East Kent Golgings. The PG (present gravity) of Old Engine Oil is unusually high. This is because Ken Brooker wanted to produce a beer that had the character of a barley wine, i.e. high PG, lots of mouthfeel and high viscosity but with only 6 % ABV, rather than the more normal barley wine ABV of about 8.5 %.  He has used a high mash temperature to give the required wort profile. The trick is to balance this sweetness with the hop bitterness and acrid flavors from the Roast Barley.