"My family was in the distilling business in St. Louis from the 1880s until Prohibition put them out of business in 1919. They sold whiskey they made under the name Blue Wing Whiskey. We found a copy of the original front label on the internet and my brother, who is an artist, was able to recreate it for use today.  C.H. Wittenberg Distilling Co. made both a bourbon and a rye. We focused on a rye. This whiskey is a blend of 60% rye, 15% caramelized rye and 25% smoked barley malt. I am collaborating with a small local distillery that makes several other fine spirits, Square One Distillery in Lafayette Square, to make the whiskey. This is a very rare opportunity to bring back this spirit to market." -- William C. Wittenberg, owner 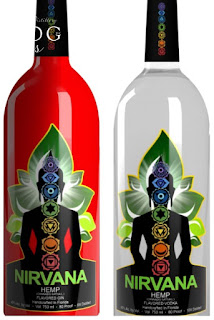 We spared no expense and time in the pursuit of creating perfection in the bottle with both of these spirits. We use only the finest ingredients in Hemp Hearts from the Cannabis Sativa Plant and both of the liquors are distinctly crafted, distilled 10x, filtered, gluten-free, and organic made with non-GMO corn.

This process and care lead to drinks that are extraordinary in quality, taste, and body and also complex, clean, and crisp.

Nirvana Vodka is at home in a martini, on the rocks, or in a gimlet as it is in a “Bloody Mary Jane.” And, Nirvana Gin is an especially versatile spirit in a gin martini, in a simple gin and tonic, or in complex gin cocktails.