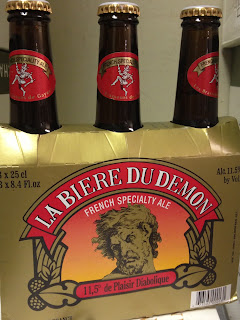 
La Biere du Demon
Blonde beer of very high density that is brewed with a higher quantity of malt than commonly used for classic beer. Demon is cultivated with a special yeast subject to fermentation for 15 days and kept in storage for a month. It remains the strongest blonde beer in the world.
• ABV: 11.5 %
Notes: Powerful alcoholic aroma, sweet and refreshing. Blonde, dense tasty and long in the mouth.
Posted by Paul Hayden at 12:20 PM