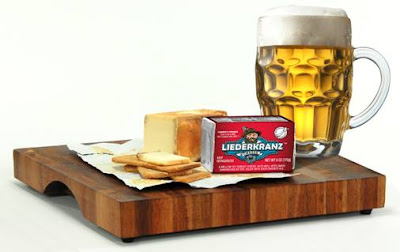 In stock at Forsyth, come in for taste,

Liederkranz is back in stock again at Forsyth
We got it for the first time in 25 years last year -- now it is back again!!!!
Come taste this truly original American cheese today!!

Liederkranz is an American cheese that was created in the "Limburger style". After being sold a few times and problems with fire and other things, the production of Liederkranz ceased in 1985. I started at the store back in 1987 and never had a chance to try the cheese. But for years after I started, I had a million requests for this cheese that was no longer being produced. I am very excited to announce that Liederkranz is being made again and is now available in limited quantities around the midwest and at The Wine and Cheese Place.

Here is the full story:
Liederkranz is an American recreation of Limburger cheese, made subtly different by the use of a different bacterial culture for ripening....cow's milk cheese, with an edible pale yellow-orange tan crust, and a semisoft, pale interior with a mildly pungent flavor and distinct aroma....Liederkranz was created in 1891 by Emil Frey (1867–1951), a young Swiss cheesemaker in Monroe, New York....Frey named the cheese after a local singing society, a Liederkranz Club ("wreath of song"), perhaps the famous one in New York, or perhaps really just on a whim for its Germanic sound.

The Monroe Cheese Company, the original source of Liederkranz, passed to new ownership, but Emil Frey stayed on and followed Liederkranz production to Van Wert, Ohio, in 1926. In 1929 the company was sold to the Borden Company. Frey retired in 1938." -- Wikipedia

After changing hands a few more times, fire at the plant, and bacterial contamination, the last batch of Liederkranz was produced in 1985.


On March 24, 2010, DCI Cheese Company announced the company was reintroducing Liederkranz cheese to the market. The cheese is available at specialty retailers across the Midwest.

Watch this video about Liederkranz: