Brewed for Hamburgers!
Brewed in collaboration with Shake Shack! 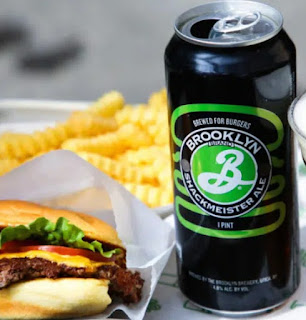 Brooklyn Brewing Shackmeister Pale Ale...$11.99 / 6pk 16oz cans
Brooklyn Shackmeister Ale was developed for the sort of fresh-off-the-grill staples that everyone loves. A slightly sweet malt base and a refreshing burst of hops makes it a welcome companion to griddled burgers, crisp fries, snappy hot dogs and beyond.

Back in the days when Shake Shack was still just a single shack in Madison Square Park, Danny Meyer and his team came to Brewmaster Garrett Oliver to develop a beer that would pair perfectly with their delicious burgers. After many semi-scientific burger trials, Garrett and his brewers brought the first kegs of Brooklyn Shackmeister Ale to the park. A touch of hearty malt character matches the rich griddled notes of the burgers, while the crisp hop edge keeps things refreshing.

Shortly after those first kegs were tapped, another Shake Shack opened, then another. Today, Shake Shack and Brooklyn Shackmeister Ale can be found around the world. Find a Shake Shack near you and enjoy true harmony between burger and beer, or let Shackmeister shine next to your favorite meal.