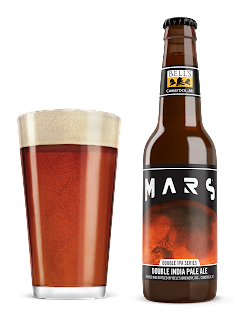 Released initially in August, 2014 as the first beer in the Bell’s Planets Series, Mars (The Bringer of War) is a double IPA with a complex hop character and a malty backbone.

Notes of tropical fruit, citrus, pine, lemon, lime and pineapple are all present in both the aroma and flavor. Hopped at a ratio of about 3.4 pounds of hops per barrel, the recipe for Mars was developed from a trial batch called Larry’s Latest Double IPA brewed in our original brewery located adjacent to the Eccentric Café in downtown Kalamazoo.
Posted by Paul Hayden at 9:25 AM